This was the final Open Streets event of the year. I've come to appreciate this event. When I'd first heard about it, I had an apprehensive attitude towards it... but I've warmed up to it. I enjoy it.
I used this opportunity to get Fizz finally registered with BikePGH!'s "I Heart My Bike" program. They seem to be using a national bike registry program called BikeIndex which I immediately loved. You can upload a photo of your bike with serial number and list added components like fenders and tires as well as descriptive items like the color of the bottle cages.
I went to work getting her registered: https://bikeindex.org/bikes/52607
Eventually, BikePGH! will upload the photo they took of Fizz and I with that awesome iconic background with the Pittsburgh skyline and giant heart. 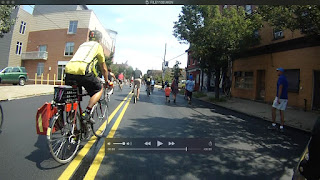 Afterwards, I ran into Marko... or I should say... I rode right past him and didn't see him! I might have been concentrating more on not crashing into other cyclists and people walking the route. The number of people out was incredible. Open Streets is popular!

This kid had some sort of catastrophic mechanical failure of his bike. His bike simply stops and the front wheel lurches up. I wonder what would have caused this... a broken chain? Something getting caught in the spokes? I don't see any debris... curious.
EDIT: after conferring with Marko, he suggests that the child's front wheel hit the foot of the pedestrian in front of him,  which is obvious to me now.

We rode into town where I needed to depart Marko's company and veer off the route to hit an ATM and get some cash for a bánh mì hoagie at Lucy's.
After I obtained my delicious sandwich, I ran into Marko again.
We found some shade and ate. It was dreadfully hot and sunny, standing still was awful, I preferred the breeze that we'd get while moving on the bike.
Yale and Lucia stopped to chat before I had to depart for an afternoon Pirates game. By now, the streets had opened back up to cars and with that, brought the blind and clueless.

I had a close pass and a left cross close call on my way back to the ballpark.

For the short time that one enjoys the freedom of Open Streets: not having to worry about a car running me down and those pesky red lights too... I got quickly accustomed to blowing through red lights and the peace that comes with a car-free street.


Last night, one of my bottle cages broke. It was rattling something fierce and letting the bottle list to one side and bump against my leg with each pedal stroke. Not enjoyable. This made for an opportunity to ride over to Thick to replace it. I hadn't seen the new sales area yet and wanted to ride over and check it out. Wow. So awesome.
While I was looking at a replacement cage, I saw a pink one and then some gears started turning in my head: "I should change the bottle cages to pink and... wait... my bar tape is fading... I should change that to match."

While I waited for Ethan to wrap Fizz in some new tape, I wandered over to the new Doce Taqueria at Elizabeth's recommendation. Munch also recommended it.

It was so very good. Fresh cilantro and lime made it. There was also a wide array of hot sauces to choose from. I need to try the new TAKO Downtown soon as well. The wave of new taco places in the Burgh is wonderful. I like upscale tacos.


And, here's the result of my hi-viz revelation: 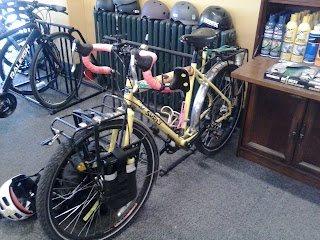 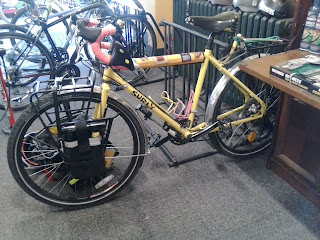 It turns out the cage probably snapped because I needed spacers over the front derailleur clamp to keep the cage from bending when tightening the bolts. Ooops, my bad. Chris gave me some spacers and patiently showed me how to install them: "No, the washers should go between the cage and the head of the bolt."
Who knew?

Ken was interested in the Fly6 camera, asked about the cameras and waved goodbye to it as I left. 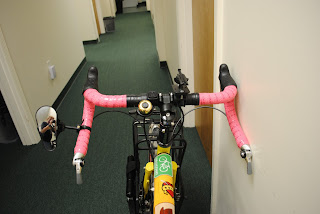 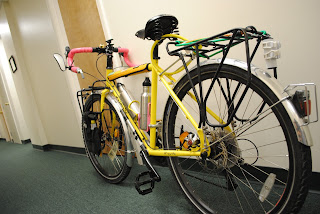 Posted by Unknown at 8:56 PM No comments:


I've become fond of short, Strava sprints, I try and break my PR every chance I get. There are several segments over the Sisters Bridges: the Warhol and Clemente. The Clemente Bridge has a bike lane, and I use it frequently. Tonight's effort was 39 seconds on the outbound. 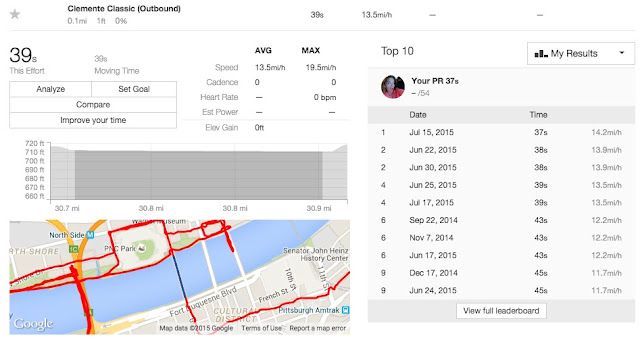 Holy moly... a QOM? After taking a deeper look at this, it's apparent that getting greenlights at two intersections along this segment are key: if you get both green lights and no oncoming traffic, you can get this QOM. No skill required, just luck. 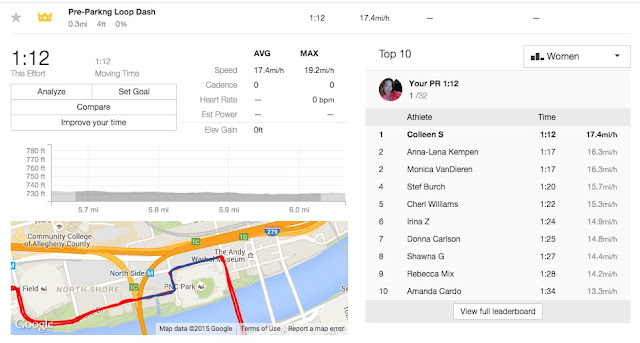 Tonight was Flock and I stopped at Conflict Kitchen for a snack of Cuban tostones (fried plantains). While I waited, someone waiting in line behind me got really close to the rear camera. Yikes. What are you doing to the back of my bike?! 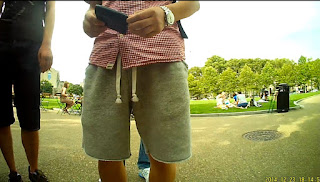 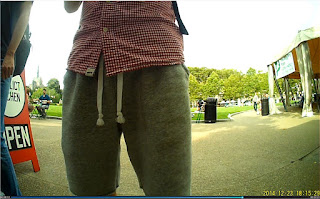 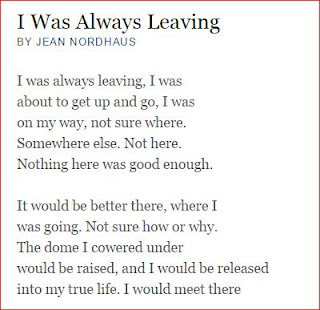 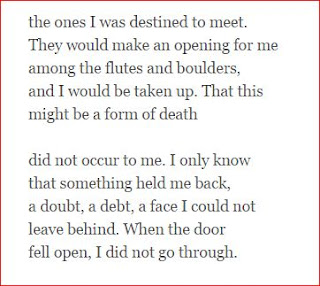 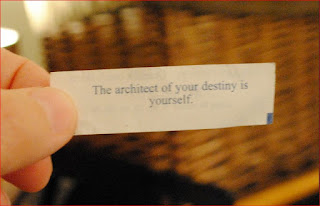 Pittsburgh is the Furries Mecca. They have had an annual convention here for the past ten years and strangely enough... Pittsburgh, which would normally eschew the new and odd world of Furries, has welcomed and embraced them. This is one of the anomalies of Pittsburgh that makes me smile: backwards, conservative Pittsburgh Yinzers and Furries mixing it up.

On yesterday's ride, while we missed a Furry Parade, we did see some Furries using the Party Pedaler. 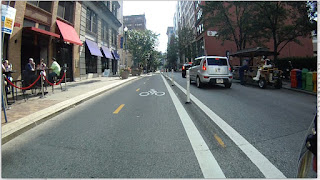 Marko asked where I'd like to go and I said I didn't care. After the words exited my mouth I knew he was going to drag me up hills and yes, he did. 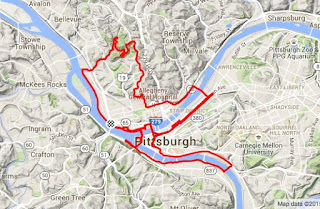 He took us up to Riverview Park, which was a nice low grade hill, but looooooong. The only other time I was up there was for last year's Pedal Pittsburgh ride. I love most of the downhill from the park: the road surface is good and you don't have to ride the brakes and weave around a myriad of potholes and other hazards. Then, he showed me how to get to the new section of trail along route 28 with murals and former Saint Nicholas church. 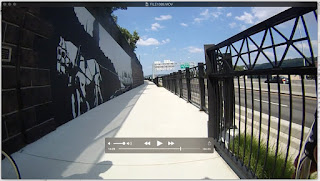 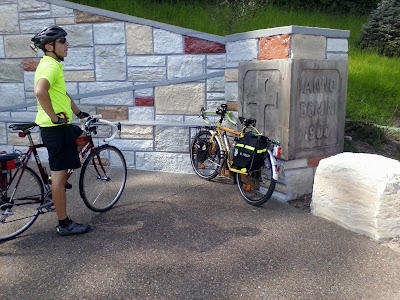 Riding through the Strip, we bumped into Kristin, the Bike/Ped coordinator for the City. She was riding a HelBike and passing us.... Arrrgh! I'm getting passed by bike-share bikes! I'm soooo slow.

Marko started chatting with her and as the three of us passed Kindred Cycles, we saw Jonathan, Tricia and Joanne congregating on the sidewalk in front of the shop and then I nearly collided with Marko. Oooops.

It seems I'm at my clumsiest and most awkward when I'm riding with Marko: I'm either falling over, unable to keep balanced to get a roll going up a hill or I'm nearly crashing into him.
Derp.


Some interesting things with my bike leaning on them:

Cycling in a monsoon

I tried to run an errand in town and time it so that I'd beat a line of thunderstorms that was due to roll through. I got dressed, clocked out and got the bike and as I approached the doors to leave, it began to pour. Ugh. I got the raincape and waited a minute or so, sure enough it slowed down to a drizzle. Awesome! I left still rain-caped and as I got a mile away from the building it began to pour again and didn't stop for another 30 minutes, in fact, it got worse: sheets of rain and wind pelted me, the streets became rivers up to the curbs because the storm drains were clogged with Regatta debris.
This was the worst weather event I'd ridden in.
But really: "worst"? No.
I resigned myself to the moisture and embraced this: I grinned like a fool; I "Woo-hoo!-ed" and "Yeah!-ed"whenever I was blasted with a wall of water. This was thrilling, this was joy.
It was like a log-flume ride at an amusement park. 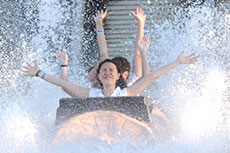 Warning: disc brakes make a LOT of noise when they're wet.


I got back and everything was soaked, the gloves, helmet, sandals, the raincape's zipper leaked and I was soaked down the front. The pannier's contents stayed dry but the outer layer was soaked. I laid all the waterlogged things out in front of a fan in my office to dry them.

Oh, and most importantly: my hair stayed dry.

I should do this more often.
Posted by Unknown at 7:12 PM 2 comments:


A few days ago, I noticed someone had replaced a gate pole along the North Side trail. Previously, there had only been a hazardous remnant of a previous pole.
The new pole was nicely marked with reflective strips. 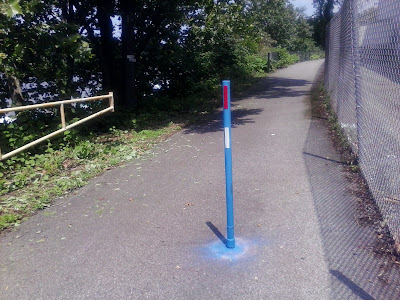 I returned a few days later to see a second coat of paint had been applied OVER the reflective strips.

Cyclists might be colliding with the pole as evidenced by this tire mark. The tire mark was in the original photo I took when the strips were present.... so, they didn't paint the whole pole? Just the reflective strips?

I rode back to the office and rooted through my arsenal of reflective odds and ends and returned to zip-tie them to the pole. I'm going to consider that someone is sabotaging the reflectiveness of the pole if they take the time to slice through the zip-ties to remove these. Someone who doesn't want cyclists using the trail at night might be inclined to remove reflective safety measures. Hmmm. 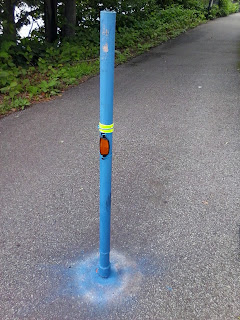 I'd been having some difficulties with my u-lock lately and nearly found myself needing a power tool to free my bike last Sunday. That was a panicked 5 minutes of fiddling with the lock! I set it aside and used a backup u-lock in the meantime. I wasn't fond of the backup u-lock because it makes a lot of noise in the holder when the bike is in motion. Today was the day I was going to try the suggested remedy of a squirt or two of WD40. Worked like a charm. 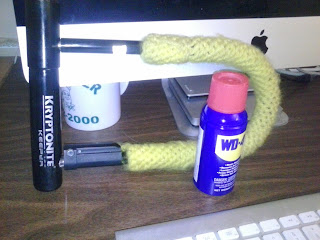 I also was in desperate need of a brake cleaning an adjustment to the rear brakes: the lever was almost touching the bars! 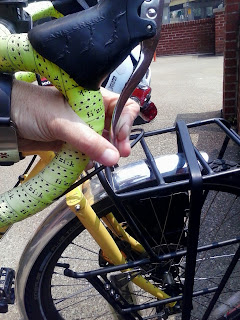 Random observation of some awesome cyclists

At the South Side Aldi, I noticed a couple cramming a whole cart of goods into 4 panniers and a backpack. YES! I'd a few hours to kill before an evening baseball game and the day off: let the cycling begin!

I wanted to try the famous Strip District food cart: Lucy's bánh mì. She was featured on Bizarre Foods America with Andrew Zimmern (and a special appearance my Rick Seback).

On the way there I was almost swallowed up by this manhole. 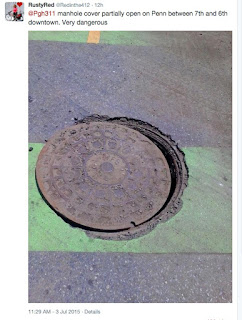 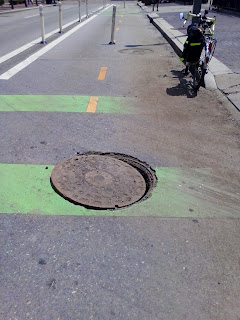 Then I headed towards the Strip only to encounter another obstacle: a group of 6 cyclists hogged the whole bike lane for 10 blocks and sloooowly too.


Finally made it to Lucy's and it was great. I should go there more often. 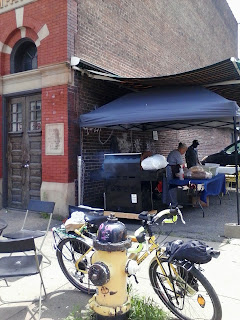 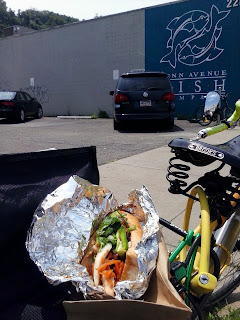 Rolled out to the Waterfront for some shopping:

The trip back down Waterfront Dr, I was met with a rude cyclist.... in his SUV. He simply HAD to race me to the red light and brake suddenly in front of me. 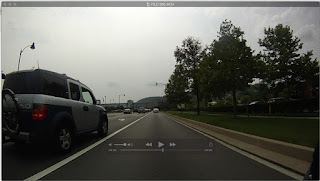 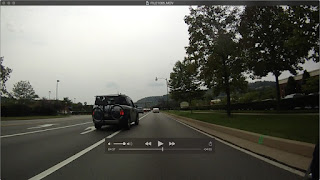 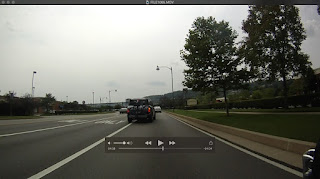 I was glad to see that the Giant Eagle installed a bike rack after I asked them last year. Sweet! It seems that if you ask them, they will appear! I'm 2 and 0 for getting bike racks installed! First: PNC Park and now, Giant Eagle! I still need to pester the Aviary. This is on my list of things to do. 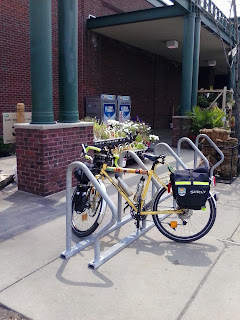