On one of my commutes this week, I had a school bus drift into my lane and a not-so-nice interaction with the driver who yelled at me through her open doors. 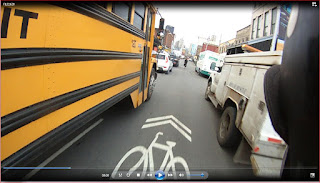 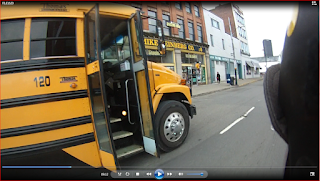 I decided to contact the company and forward the video. The outcome: the email correspondence was respectful and promised to re-educate all their drivers about the safe passing laws. Wow.

Again, my Fly6 fell off the back of the bike. But this time, I didn't realize it. Marko noticed it was missing on the Hot Metal Bridge a third of a mile away. We raced back to re-trace our route back to the Carson St pizza shop where I was absolutely certain I had put the camera in the mount. I was fearing it had dropped off in the street and crushed by a car.
We retrieved it 18 minutes later and we even rode right past it. Here's the video it captured while it laid on the ground in those 18 minutes. Two people noticed it but didn't pick it up. Remarkable.


It turns out the mount was cracked slightly. Time for a new mount. Thankfully, the kit provided a second.


We'd decided to ride over to McKees Rocks and took the bridge there. It's notorious for traffic that moves much faster than the speed limit. We had no issues. Everyone passed us without incident.

I'm happy for the good things, even if they develop from bad things.

Taking the lane vs courtesy and end "Share The Road"

This news story popped up in my feed today. I was immediately horrified and then my emotions turned to an anger: how can this happen?
A pack of four cyclists? How could the driver not see them? Was it dark? Was the driver impaired by drugs or an infirmity?
The driver made a poor decision: overtake them with an oncoming vehicle. 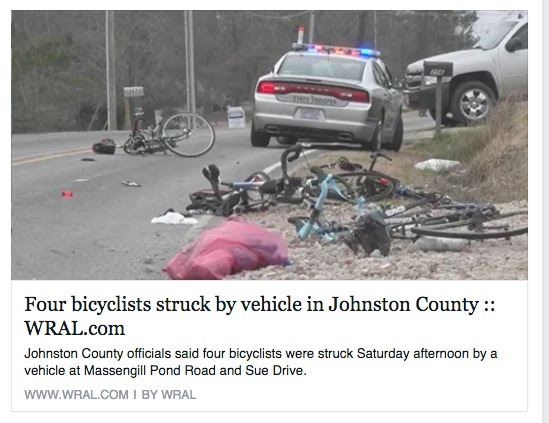 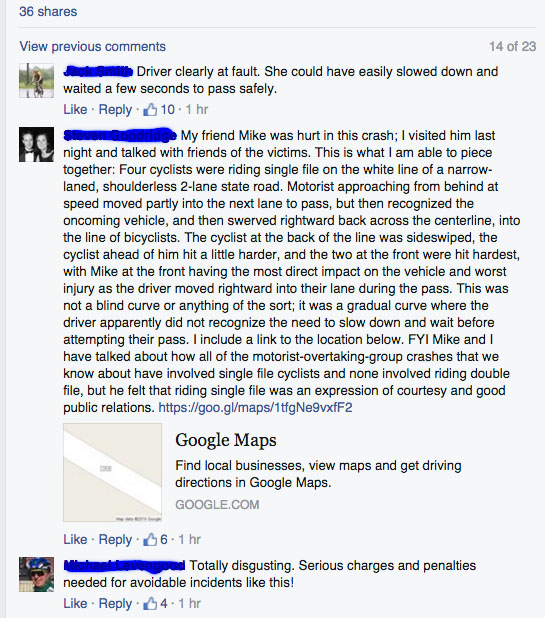 I became curious about the ride-single-file laws in that state: were they required to ride in that manner? No, in fact riding two-by-two in North Carolina is 'implicitly permitted'.


I firmly believe that my safety supersedes a courtesy to motorists. Taking the lane is believed to be beneficial in preventing motorists making close, dangerous passes. I see it in my road experience. I've had a recent experience where a motorist shouted a command at Marko and I to ride "SINGLE FILE" by a motorist who had an entire lane at his disposal to pass us.  We've had interactions with drivers who use the "Share The Road" phrase against us. A local cyclist was told recently by a Pittsburgh police officer to ride 'far to the right' and yet another local cyclist ticketed in 2013 for the same 'offense'.

However, regardless of one's comfort with placement in the road, motorists need to stop passing with no regard for the lives of other road users. $500 fines for killing people with your car is a second slap in the face to the families of dead cyclists and pedestrians.

I'm increasingly disturbed by the lack of education for police and driver misconceptions about the way cyclists ride. We aren't 'hogging the road' just to annoy and inconvenience motorists. We're taking the lane in order to arrive at our destination intact and alive. 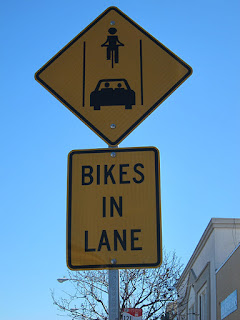 The use of the Share The Road signage was discontinued in Delaware and I'd love to see more states take that lead. 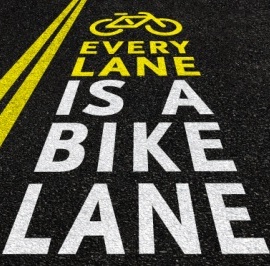 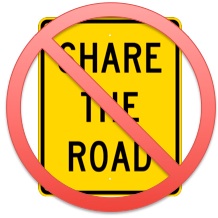 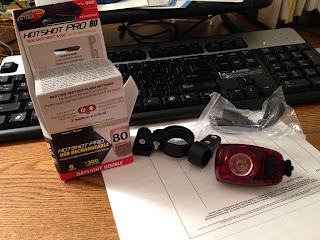 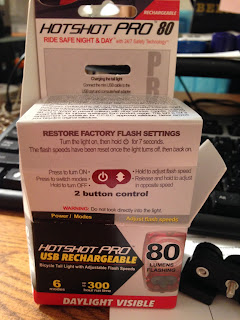 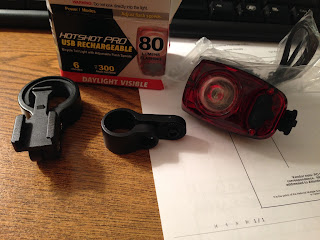 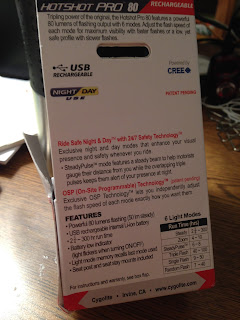 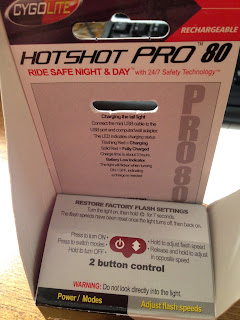 I've not yet used it on the bike, but we will soon and plan to try and get observations in a dark environment.

10/18/16 Update: yes, this thing is damned bright. Marko hates riding behind me in the dark, it blinds him. We switched it to mount on the rack (rather than my helmet), lower so it's not hitting him in the eyes, but it's still too bright. We make sure he rides in the front when we're out at night.

Rides through the eye of the video camera

Sometimes the camera sees scary things happen.
For the record, I start signaling as soon as I hit the crosswalk, (I had trouble getting the text to pop up at the exact moment I wanted to in the editor... I'm still learning the tricks of iMovie.) I gave plenty of warning to other vehicles that I was changing lanes.

This spot along Penn ave seems to be jinxed:

The camera also sees pedestrians getting the short end of the stick frequently.

Other times, you run across some really cool sights and the camera lets you go back and see them for a second time.

The death of Mike McDermott last month sent the local cycling club that he was a member of as well as all of the Pittsburgh bike community into mourning yet again. Another memorial ride. 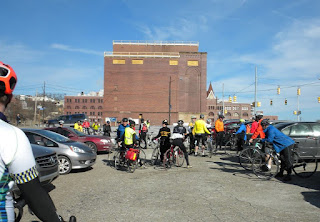 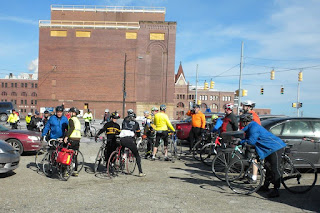 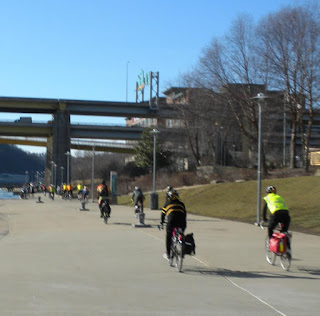 In an interesting twist, the gentleman who was riding sweep for the club insisted that we not take the lane, in any situation. Several of us disagreed with the argument that we needed to ride far right in order to 'show respect to' the motorists. We felt riding in the center of the lane encouraged safe passes instead of having motorists squeeze into the lane with us with oncoming traffic.
We're not compromising our safety, and so we left the ride. Disconcerting and disappointing. 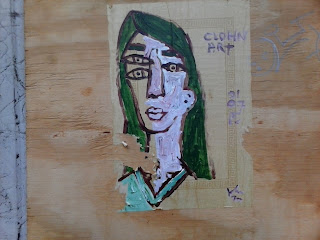 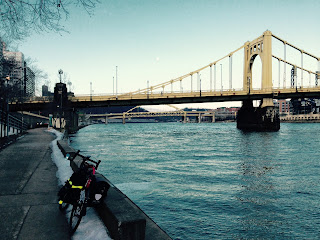 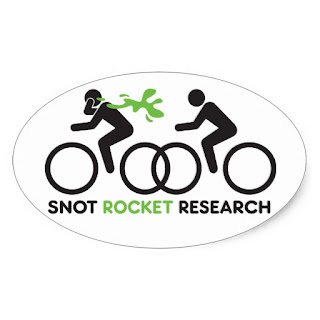 Anyone who exercises outdoors in the winter knows all too well the affliction of snot. Joggers, cross-country skiers, curlers, snowboarders and cyclists alike produce copious amounts of nasal mucous. It's gross, this common bodily function. How do you deal with it? Wipe it on your glove? I've been making a symphony of sniffles, snorts and such, but sometimes it's just not enough and I've found myself sporting snotcicles. Yuck.
I needed to learn to... well... blow snot rockets while riding. If I do remember to bring tissues with me, I don't have time or a place to pull over, remove my gloves and empty the snot locker. Marko offered some helpful advice on technique, while I fretted about discretion. This is NOT a ladylike thing to do and I've not had any practice.

My first attempt led to a shoulder covered in boogers. My second attempt was a success though.