I'd volunteered again to help with a ped/bike count for the city, I think I bit off more than I could chew, somehow I'd been given three assignments. I could have swore I volunteered for one assignment. Ugh, 6 hours of counting people and bikes going by at 3 different locations and times.
I managed to rearrange a bit of work time to leave early for the 4-6 PM count and arrive to work a little late for the 7-9 AM count.
The Saturday count, I had to bail 30 minutes into that one: I needed a bathroom ASAP. Perhaps a person who needs frequent bathroom trips shouldn't be volunteering for things where bathrooms aren't easily accessible? 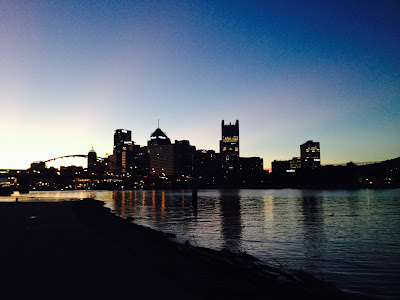 On my way to work one morning, I noticed Dan Y of Bike PGH counting bikes in the Strip. I got counted! I'm one of those elusive 'female cyclists'; I counted only 2 in my own 4.5 hours of counting.


I decided the Brooks saddle on Doomer needed a lock and since it *simply must* coordinate with the pink other items on the bike, I felt it necessary to yarn-bomb my red lock with reflective pink yarn. 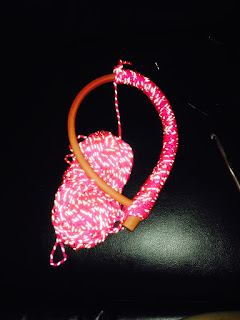 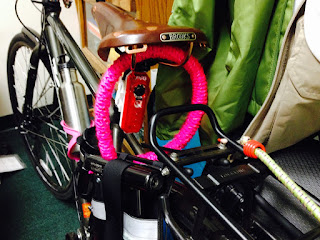 Marko and I were riding through the Strip and around 18th street, I saw a petting zoo set up in the street. I yelled "GOATS!" at Marko to let him know I simply MUST stop to check out the menagerie of barnyard animals in the middle of the city. Why it was set up there, I'll never know. The ass didn't look very happy to be penned up. 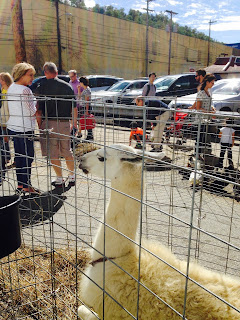 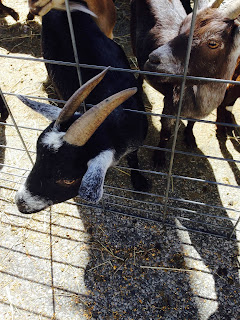 We also ran across a colony of recumbent cyclists at the Point.

We took a trip out to Squirrel Hill to visit a few of the rare PawPaw trees in the city. 2 are planted at a fellow cyclist's house, the others are in Schenley park. None of them had fruit we could reach. We did find some apples to snack on however.

I've taken to pestering the local news stations via Twitter whenever they use "accident" to report on traffic conditions.

Marko's often told me: "The hills don't get any easier, you just go up them faster." I can attest to this truth: 5 of my trips up the hill to my apartment this week were under 5:01. I'm getting faster. 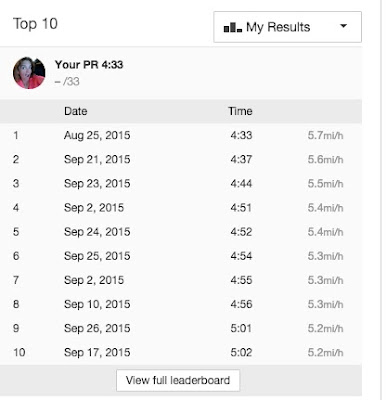 On Saturday, Marko invited me to tour the sewage plant that services Allegheny County.
You heard me right. I love learning about stuff like this and so are many other folks: they had full tours all day long, many demonstrations and exhibits pertaining to the rivers' ecosystems and such.
Did you know the Allegheny County Sanitary Authority has a mascot? Yeah. They do. 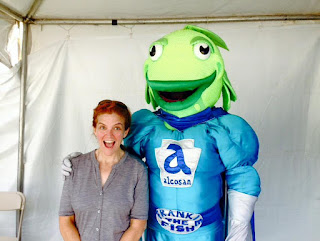 Sunday started out as a "We'll just ride around" day. The weather was gorgeous and no higher than 70 degrees. I put off errands and decided that spending the day out on the bike would be time much better spent.

Somehow, well into the day, I realized that I'd neglected to eat breakfast. This is not like me, I'm not the sort of girl that skips meals. I didn't bring snacks either. What the hell? I'd totally failed myself. I sensed I might have a bad time and Marko helped me find food. We had stuffed peppers and fried zucchini and I worked voraciously on the basket of bread they brought out before our food arrived hoping it would be enough carbs to sustain me.


You know where this is going, don't you?

Before I get to the bonking, I'll bore you with some photos:


We met near REI. I noticed they're selling a line of bikes made by Fox called "Ghost"
Um,  really? "Ghost"?
Yuck.


In Boston, we happened upon Tricia and Jonathan returning from DC as they were seeking out ice cream.

Marko toured me around the Boston Loop and then over to Glassport to get our lungs full of the coke plant's wonderful smells.


On our way back through McKeesport and Kennywood, I started getting sleepy and then near the Waterfont, I need to get off the bike, walk around and splash some water on my face to try and wake up.
Then, in Schenley Park, 49 miles into the ride and slogging along at 4MP, Marko said "You're bonking! Eat something!" He offered me an energy bar and his soda (to his credit, he'd been offering me food earlier and I kept refusing it thinking I'd be fine). I took the energy bar collapsed in the grass, chewed my energy-bar-cud and I stared up into the sky... because that was about all I could do.  My deprived brain looked for shapes in the clouds and noticed a satellite racing across the sky.

You know I'm exhausted when I risk getting bugs in my hair.
I was even having trouble finding words... my brain wasn't functioning at full capacity: diverting resources to essential bodily functions, I suppose.

After about 15 minutes of resting and waiting for the carbs to kick in, I started feeling better and we were moving again.

So, the moral of the story is: eat a proper breakfast and bring snacks when you ride with Marko and let him talk you into extensive riding.


Despite my close call, I thoroughly enjoyed riding to new places.
New places on a bike + good friend = much goodness

First, some videos of annoying and dangerous drivers:

The city has beefed up police patrols along the problematic Melwood Ave to keep speeding down. This is a good thing, however, if the police are going to pass me within 2 feet, how is this an increase in safety? *sigh*
I would have quickly pulled over out of his way if he had his lights on and given me a quick 'woop' of the siren.

This idiot had TWO opportunities to bail on this narrow alley (Spring Way) and get onto a street with a 25 or 35 MPH limit, but they stay behind a cyclist going 10MPH. WHY? I deliberate slowed down after the tailgating became obnoxious and waved and "Hello!"-ed them when the driver beeped at me. An alley is not a freeway!


(Park)ing Day!
Salty had arranged for the group to meet at Dippy and we'd make the rounds all over the city to check out most of the Park-ing spots, some were non-existent, some were elaborate, some weren't even set up yet! Either way, we had fun hanging out and riding around the city on a beautiful day.

Video of Marko and K swimming in the Water space in Lawrenceville:

Photos in no particular order: 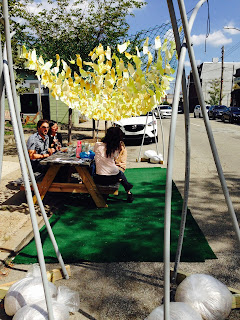 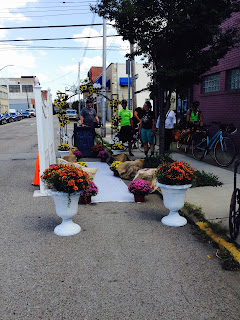 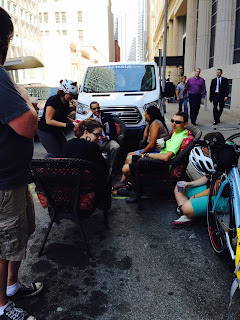 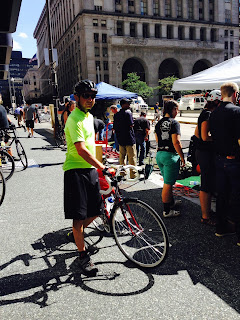 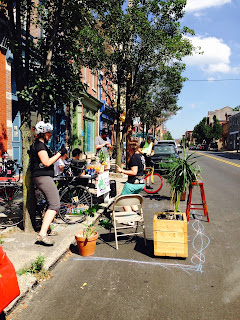 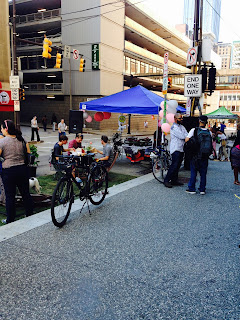 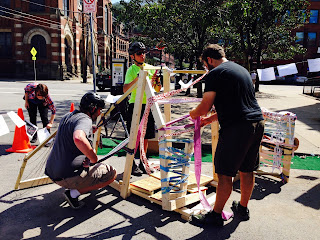 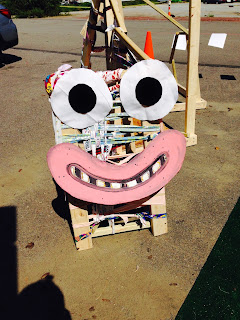 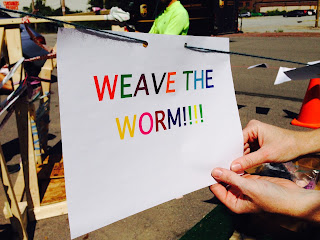 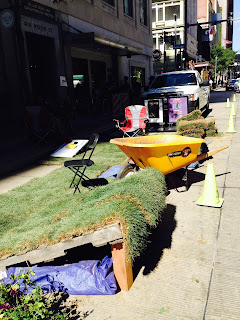 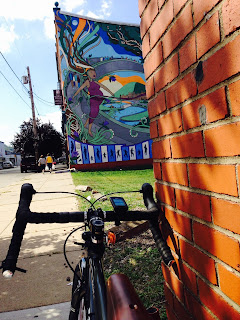 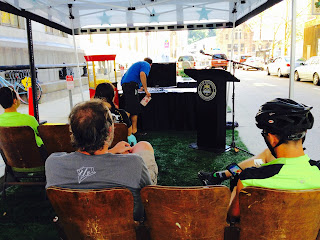 One driver attempted to back into our group. Brilliant.

Later in the day, after we'd spent a few hours at OTB resting, eating, talking and imbibing, we took part in Flock! It was calm and uneventful, just the way I like it. Some kids and a dog in a trailer joined us!
At one point in East Liberty, a youngster ran along with us, sharing in the joy. 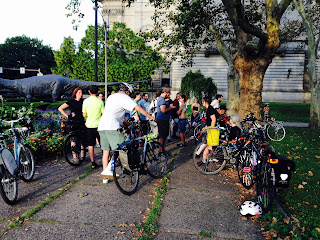 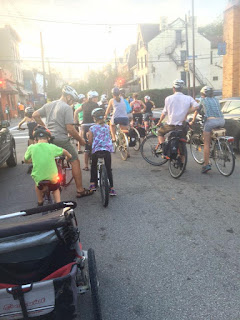 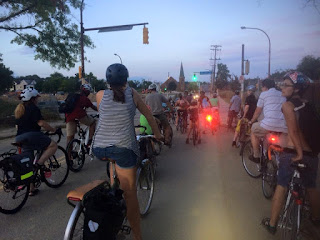 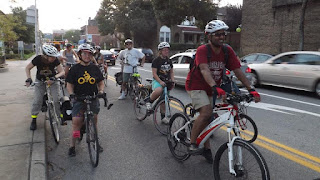 Bike to the Ballpark (now with valet service!)

This was a special event hosted by the Pirates and BikePGH!

A portion of ticket sales would be donated to  BikePGH! and cyclists managed to fill 2 sections of PNC park. BikePGH and thier volunteers set up a bike valet area where you could leave your bike and helmet and not worry about removing everything that wasn't bolted to your bike for fear if it being stolen.
It was nice to not find peanut shells in my helmet at the end of the night as I normally do.
The Pirates treated everyone with a 'Bike' ticket to a free adult beverage. OMG, it was a 24 ounce beverage too! Our eyes widened when the bartender handed us our drinks. 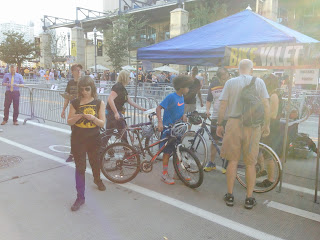 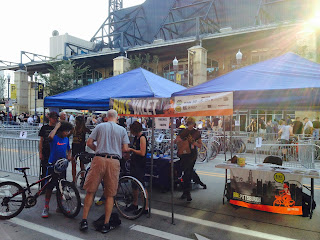 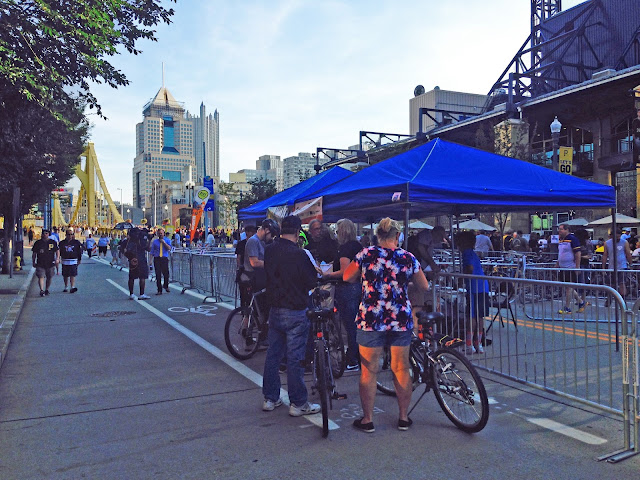 It sure would be nice to have a valet service on a regular basis. I'd pay a few bucks for that if it went to a charity.
Posted by Unknown at 6:34 PM No comments: