Ohiopyle to the Pinkerton Tunnel

I drove an hour and half to get to Ohiopyle. I don't think I'd been out there since I'd gone trail riding with my ex-husband in the late 1990's and ridden a whole eight miles that day and was really proud of my accomplishment.

The drive there was harrowing: wicked fog!

I got there before the throngs of kayakers, river-rafting and bike-rental folks arrived. These were the first cold days of the year. This morning it was in the 40's when I started and wow, I'm not used to that yet. I couldn't wait to get moving and warmed up, my layers weren't keeping me warm while I took the bike off the back of the car and loaded the panniers and necessities onto the rear rack of my Surly Long Haul Trucker. Eventually, around 11AM and 12 miles into the ride, it warmed up and I could remove the long pants and my layers. 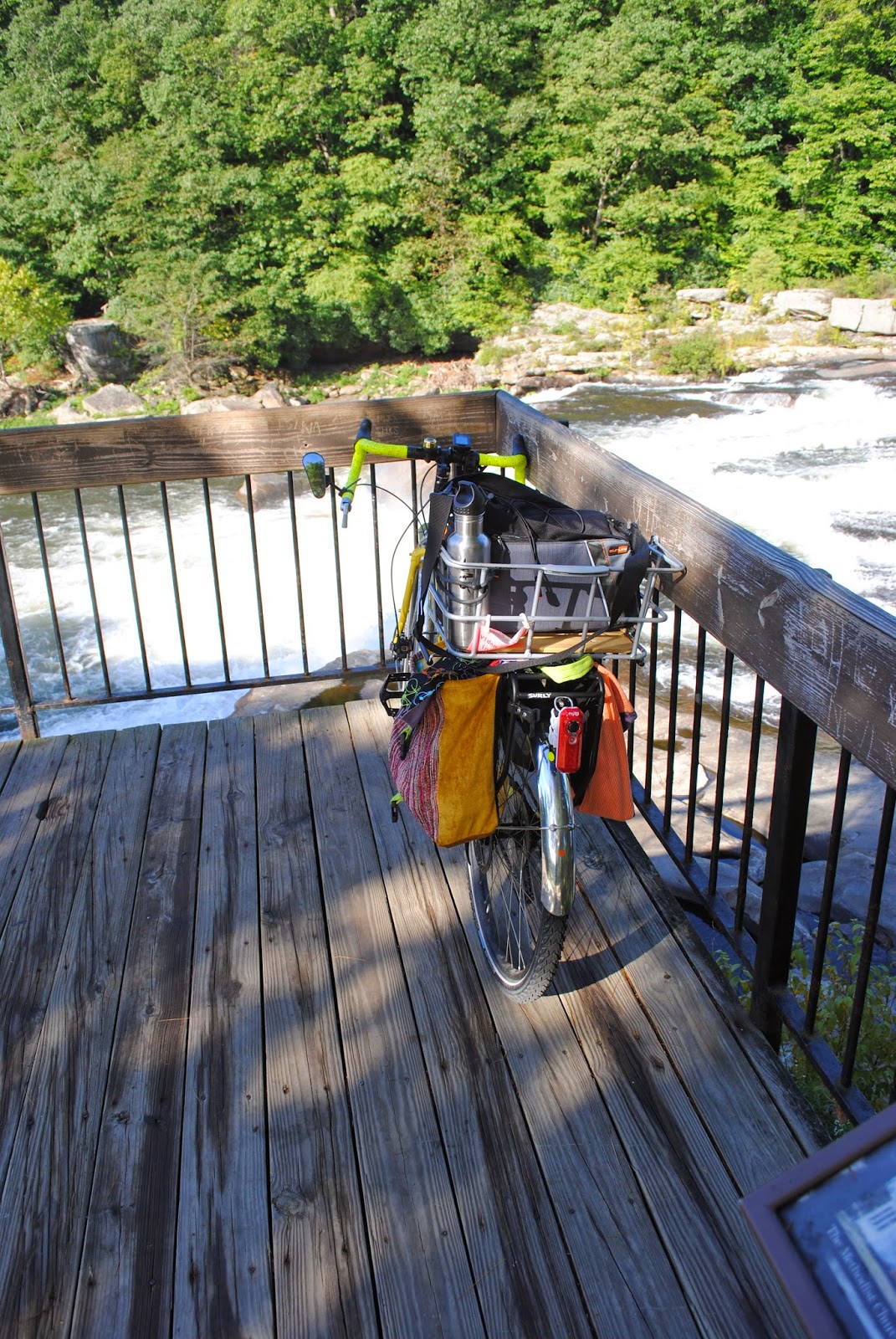 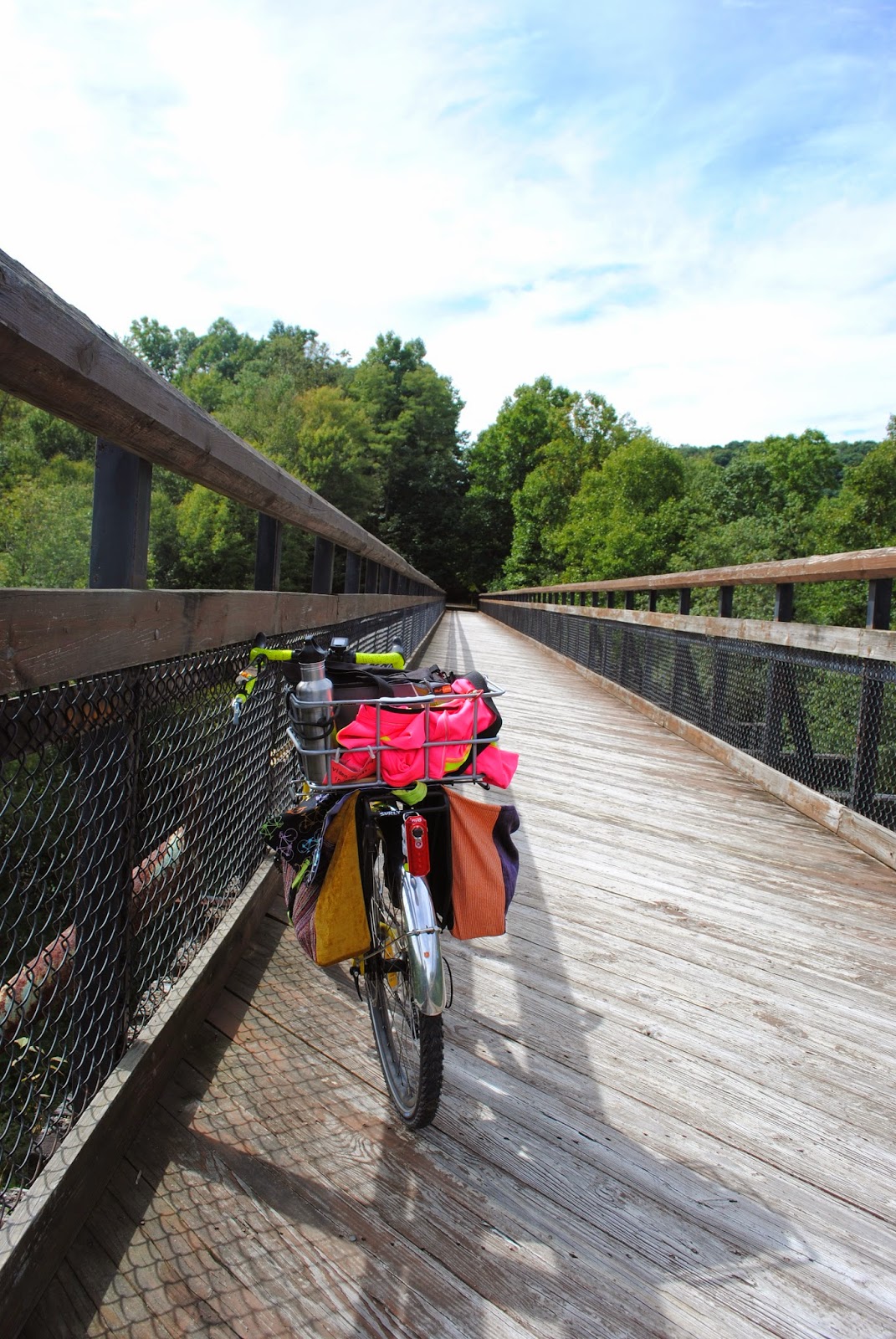 You can see why I need a rack-mounted Fly6 with all the stuff I carry back there!

In Ohiopyle, there's a gorgeous rapids/waterfall.

Normally, I'm in the city and using the camera to capture motorists endangering my life, but today I employed it to help capture some of the the beauty of the Great Allegheny Passage, which is a 335 mile trail from Pittsburgh, PA to Washington DC. Cyclists spend several days to ride it. It's quite the feather in a cyclist's cap to ride the GAP to DC. Some riders camp and some take advantage of the many bed-and-breakfast places that have sprung up along the GAP to cater to the whims of cyclists taking on the adventure. 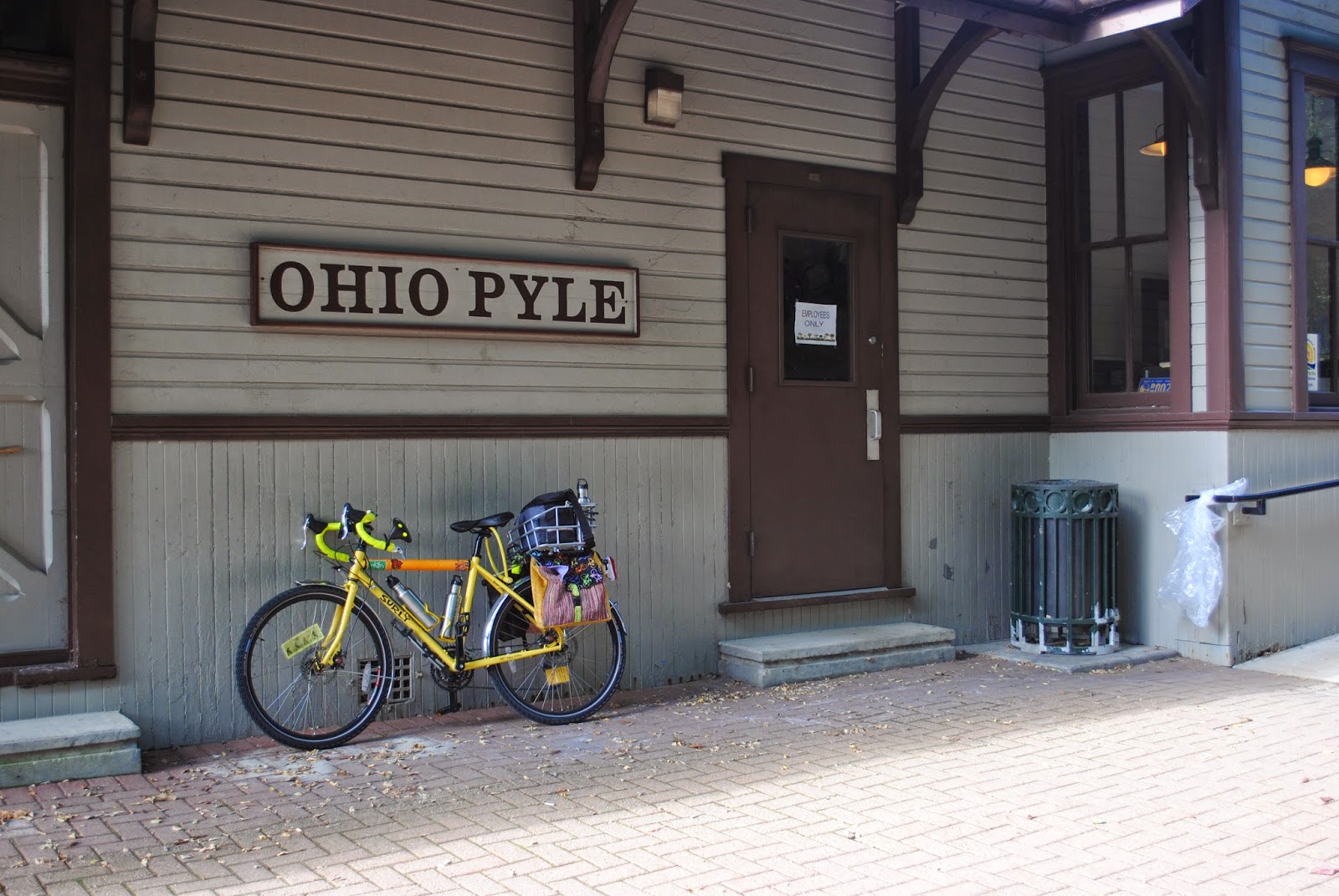 Would you believe I headed the wrong direction and started into the State Park instead of towards Confluence as I'd intended? The lovely bridges of the park tempted me and my bike just lead me to them. Eventually, I discovered I was going the wrong way and righted my direction. The bridges along the way are so scenic; here's a Fly6 perspective of all the bridges I encountered:

And here's some of the photos I took from those bridges: 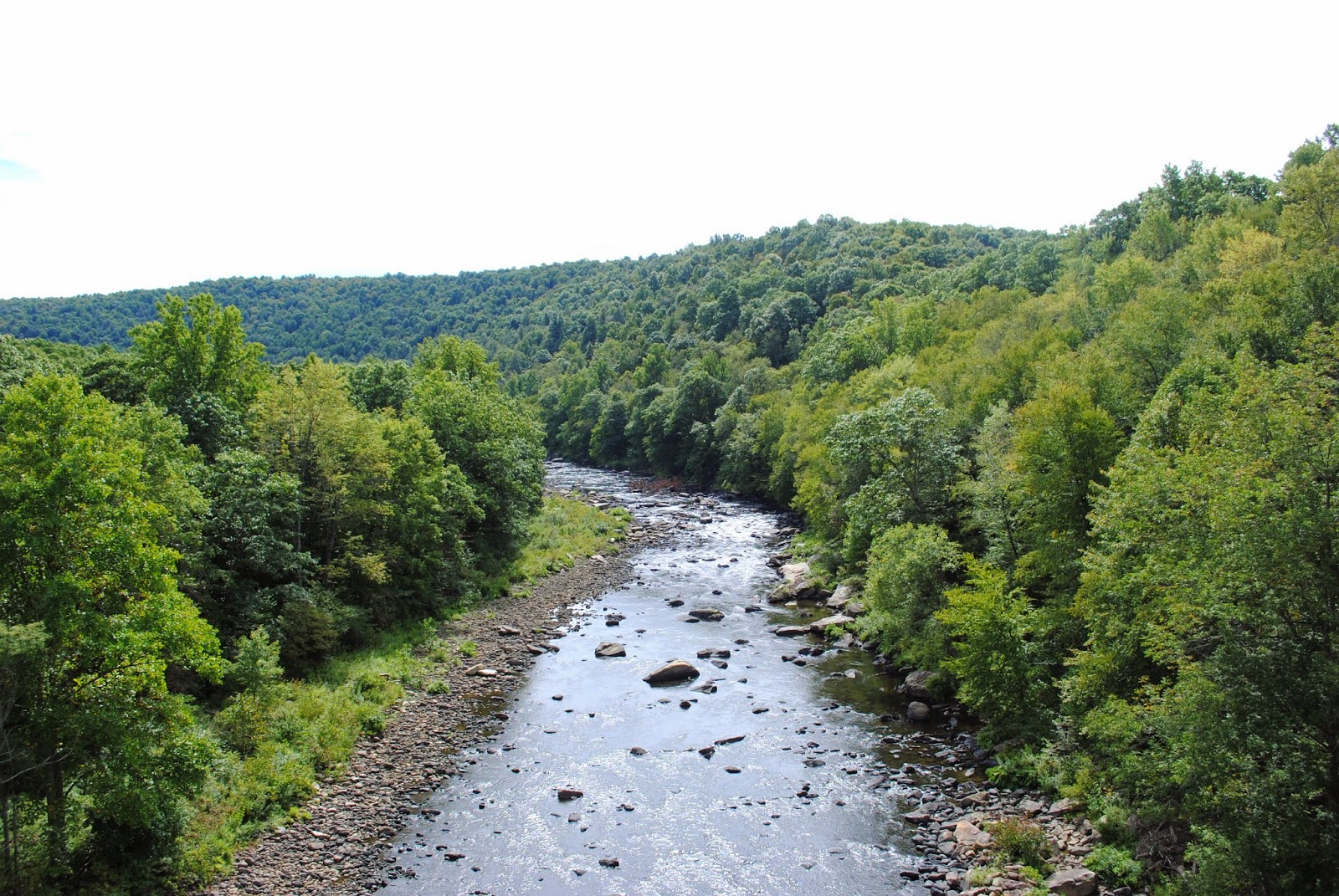 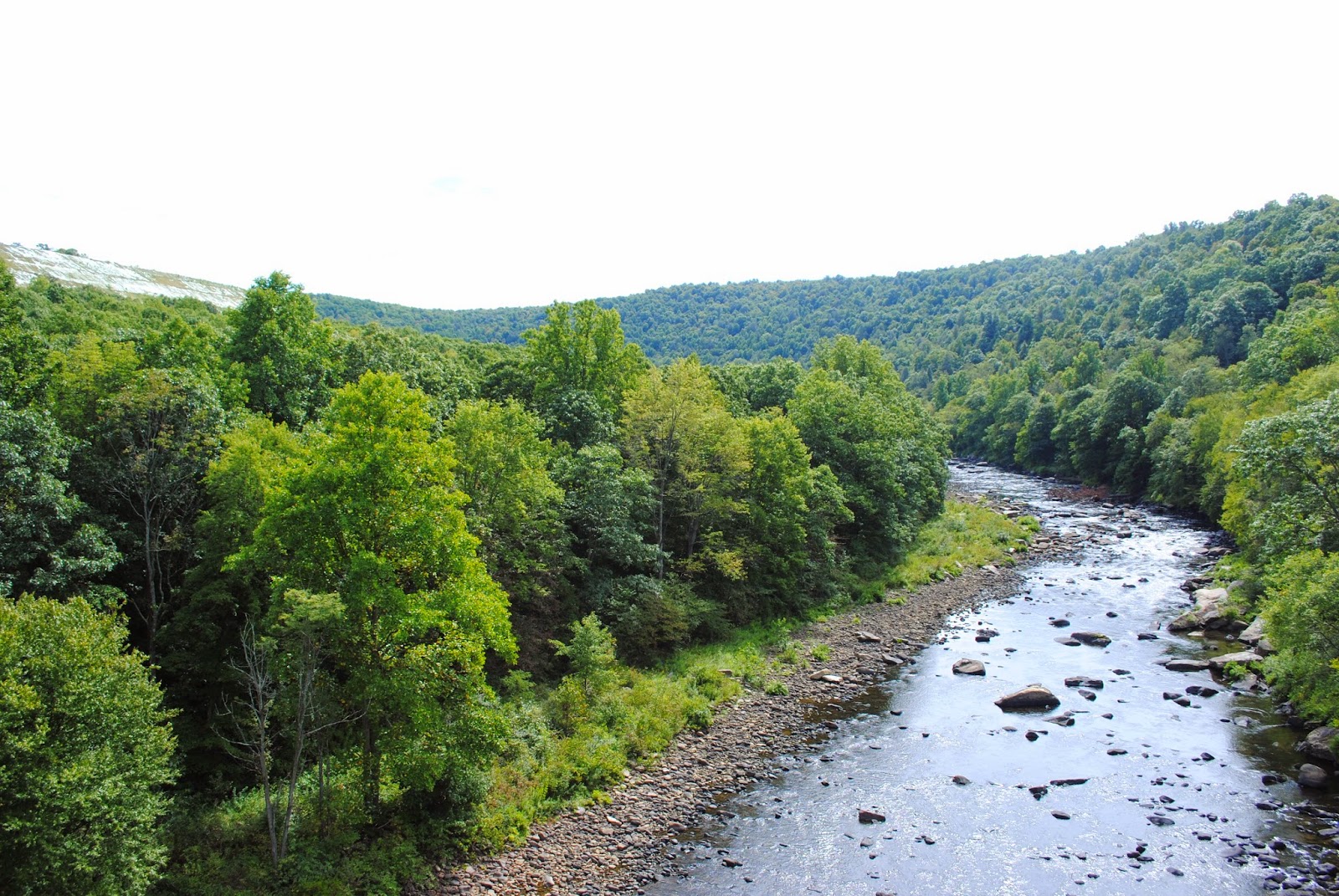 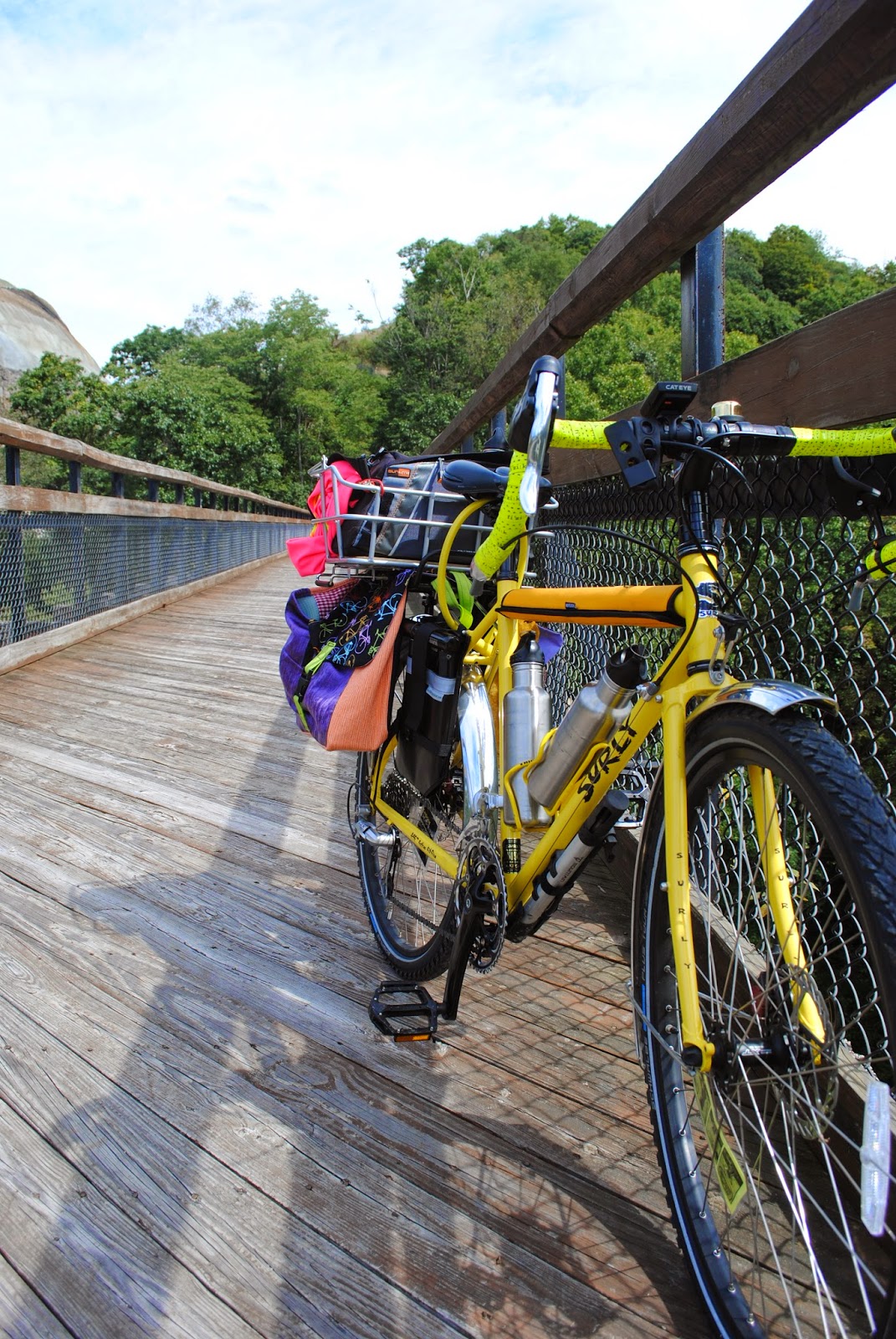 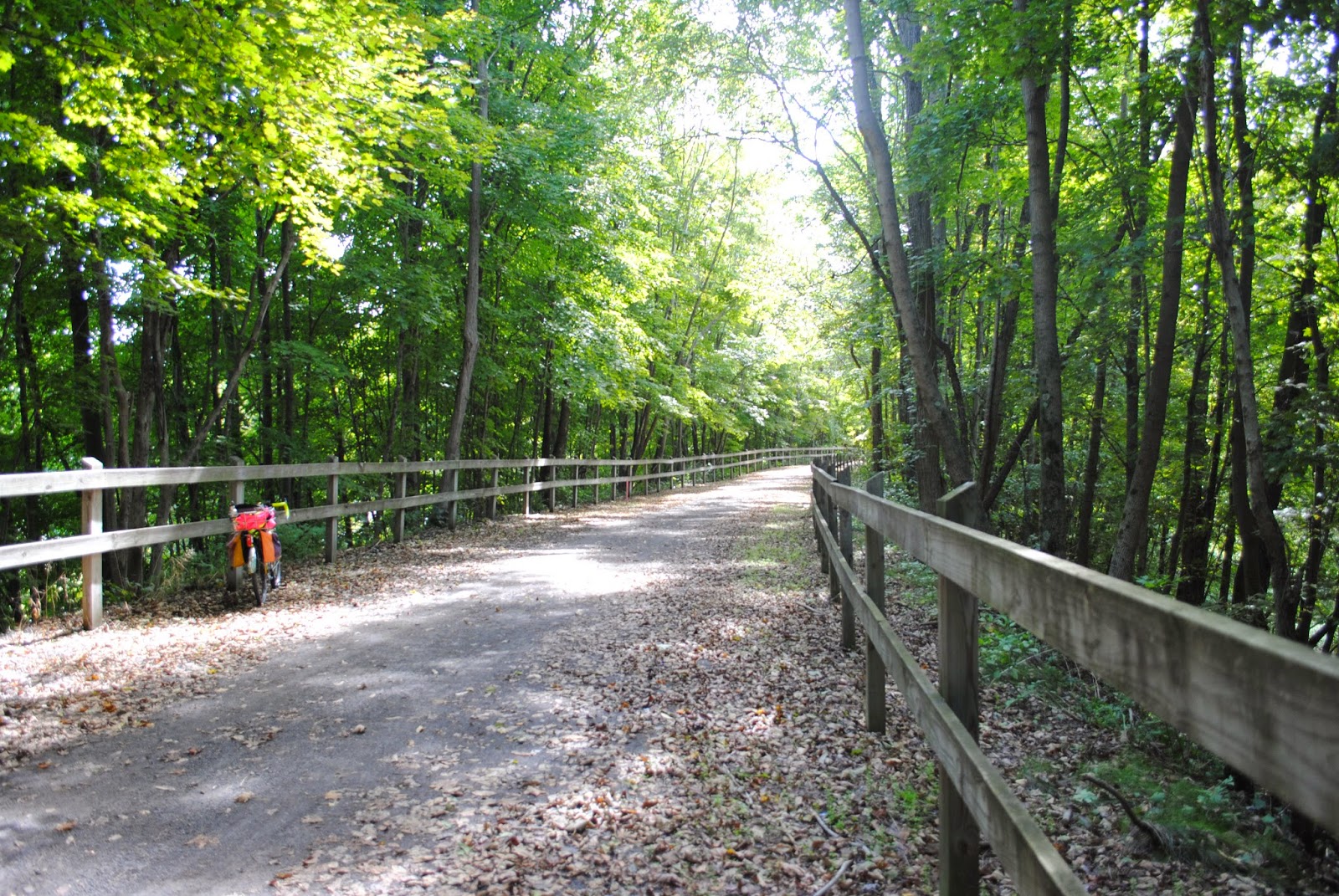 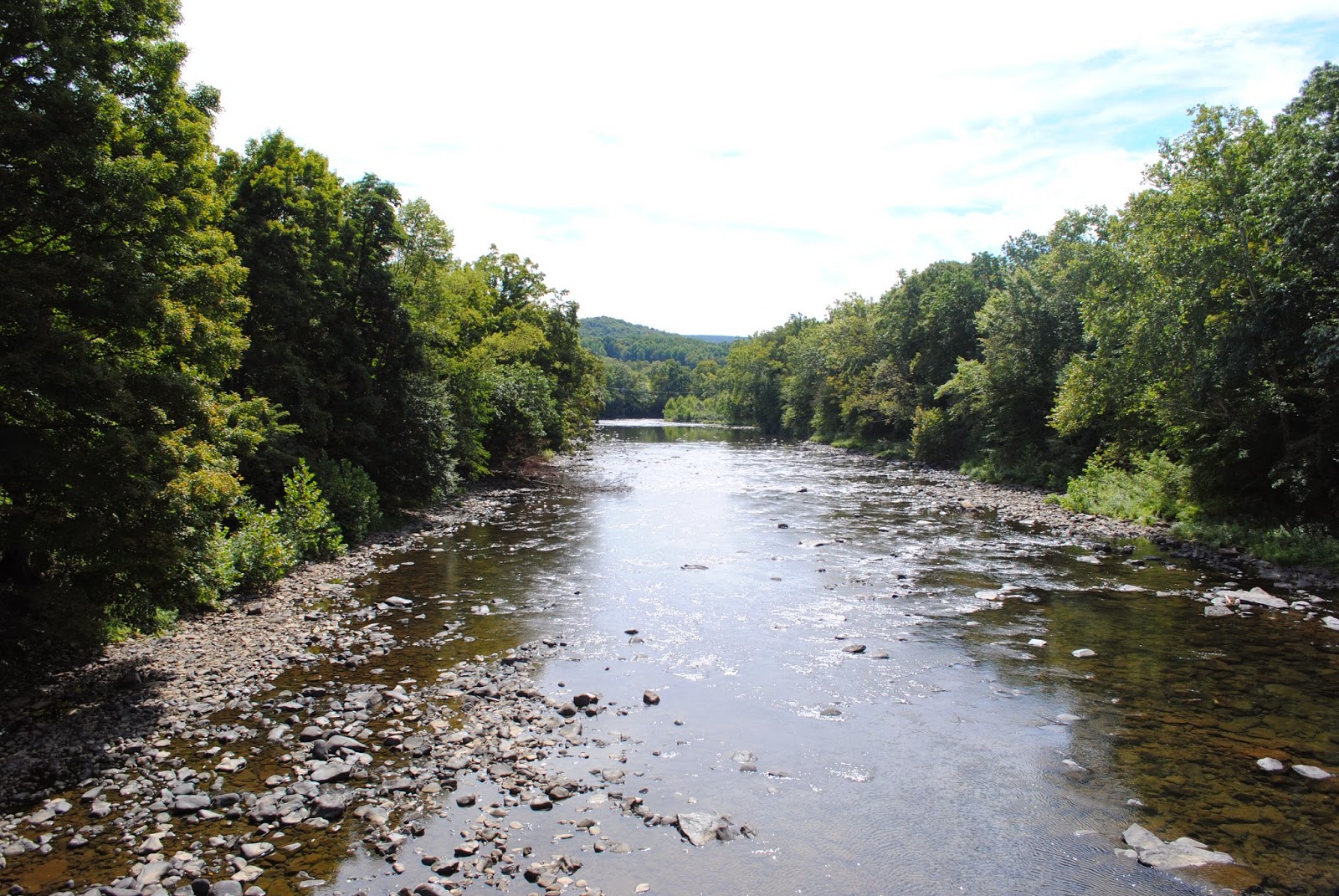 I stopped in Confluence for lunch, which was actually breakfast, as Sister's Cafe come highly recommended for breakfast-y foods. Fried egg and bagel. Nom. Sister's Cafe was also the ONLY place I could pick up wifi and send a message to Hubby. Cell service was non-existent everywhere, even in Ohiopyle. 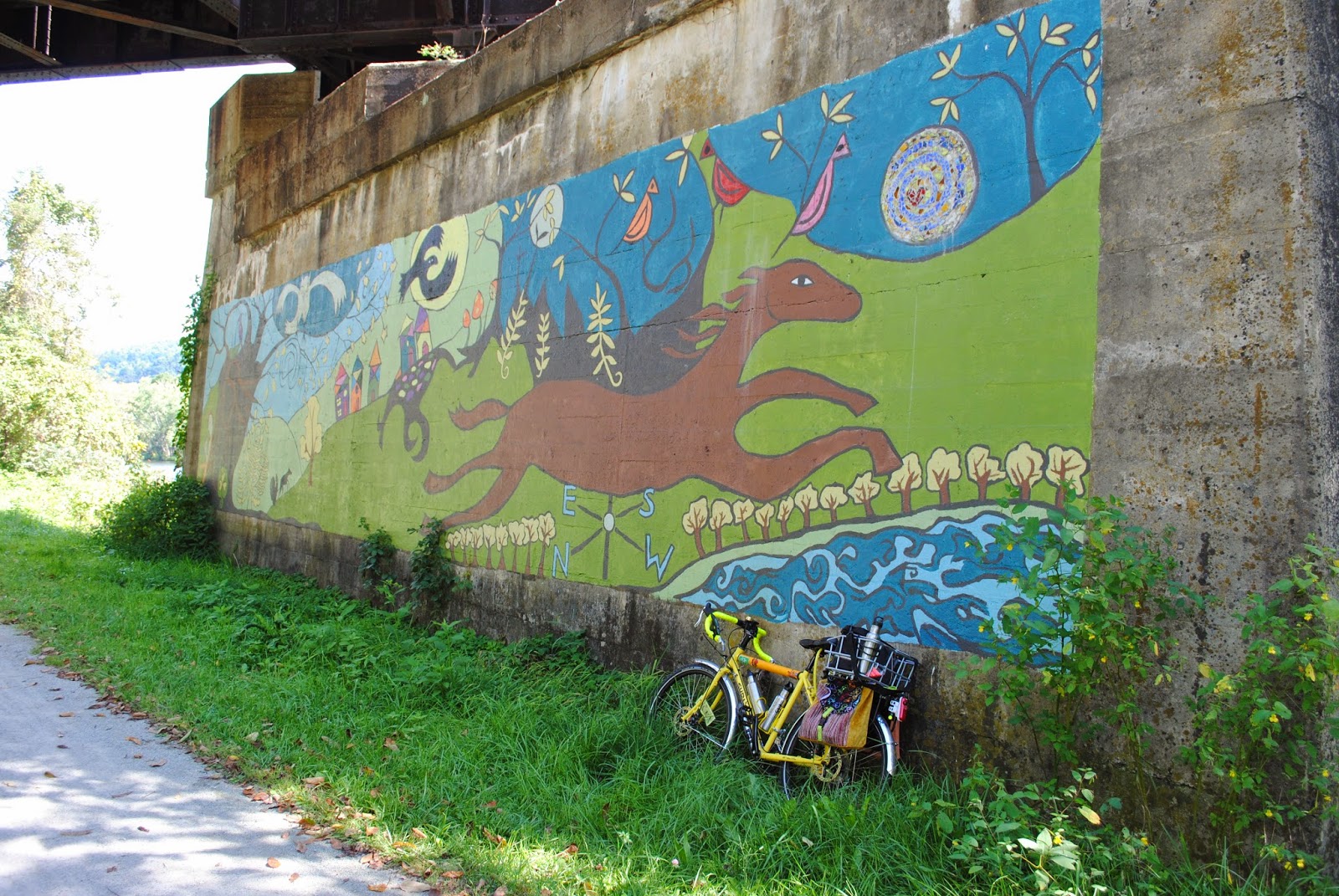 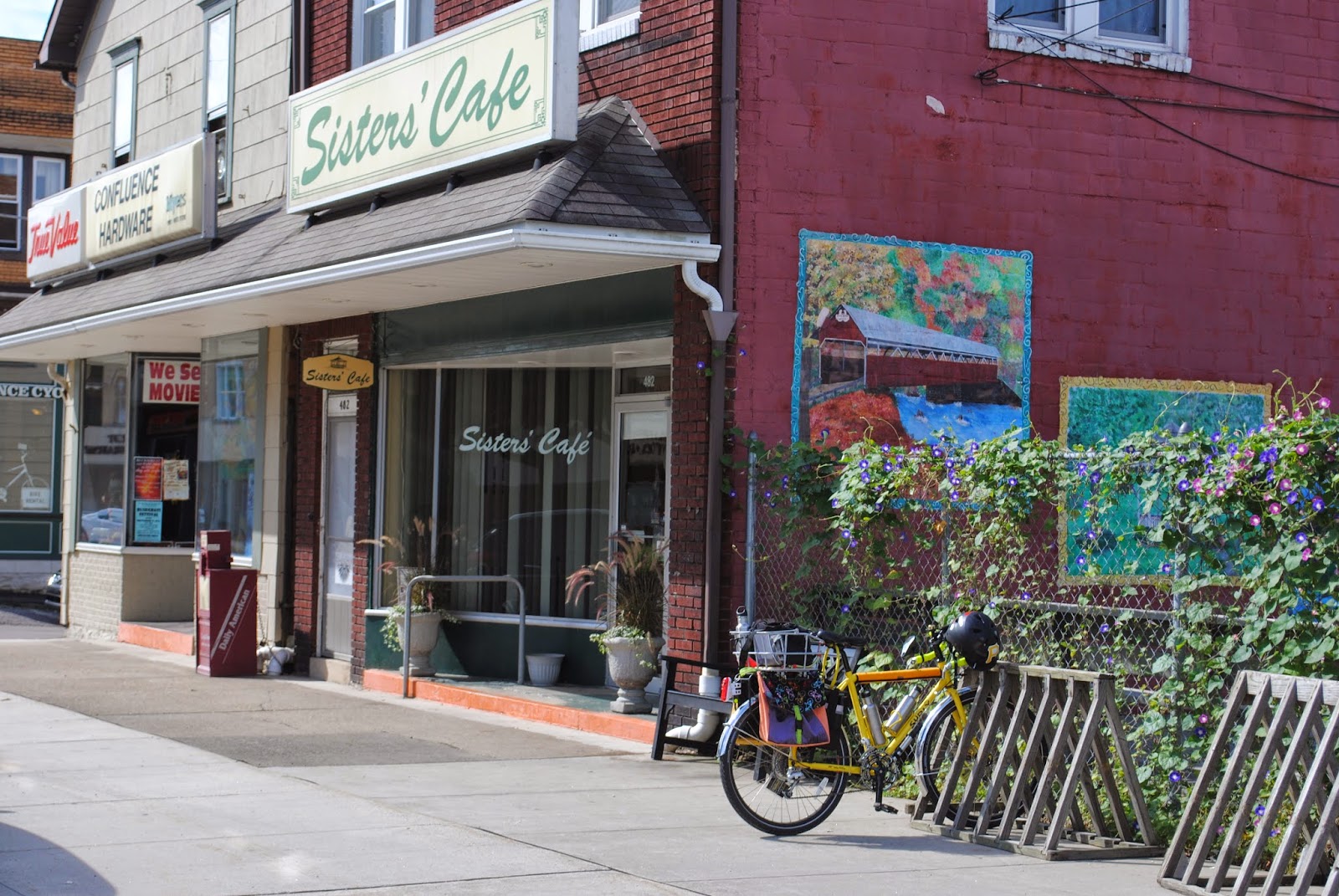 Being a city girl, I locked my bike. Discovering that nobody locks their bikes in Confluence, I felt rather silly with the overkill of a Kryptonite u-lock.

My end point was the Pinkerton Tunnel. There's an interesting story behind why this tunnel is no longer used. A friend of mine told me the story and you can read about it here: http://vannevar.blogspot.com/2011/06/nextgen-canal-train-tunnels-concrete.html 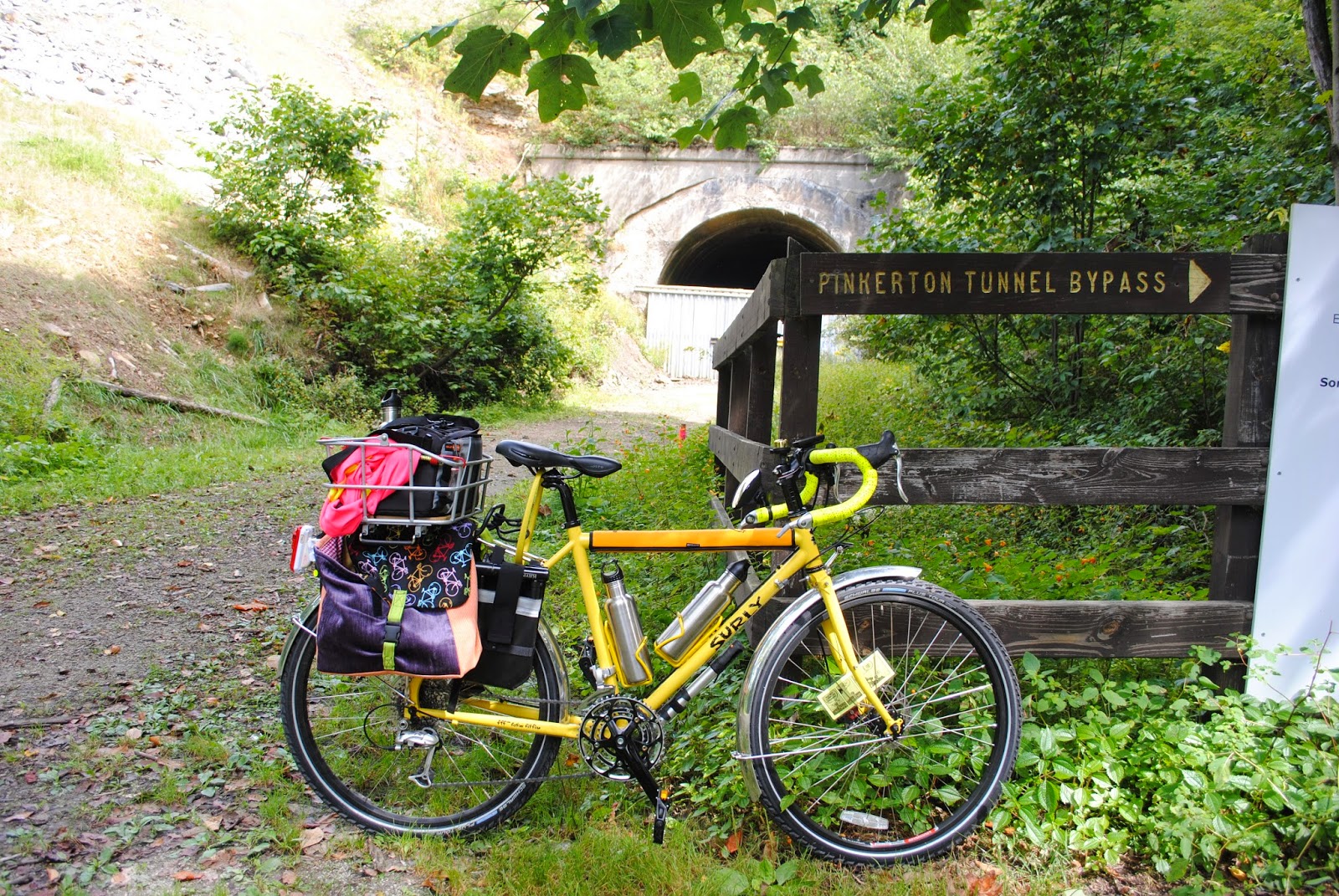 Hopefully, with enough donations, it can be re-opened, but until then, it will stay boarded up. 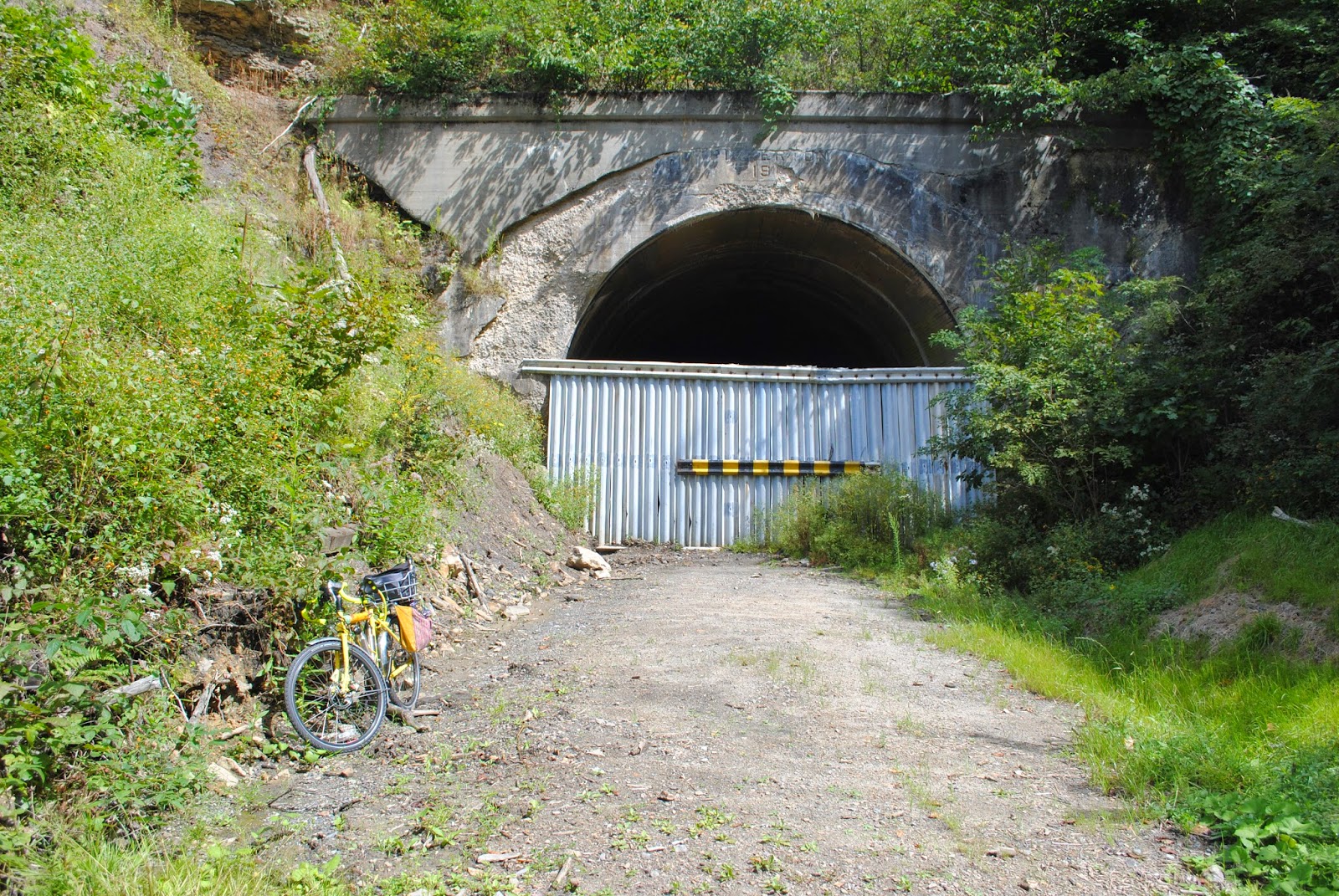 Now, just because there's a lack of cars on this trip doesn't eliminate dangers: imagine getting this railroad spike caught in your spokes? 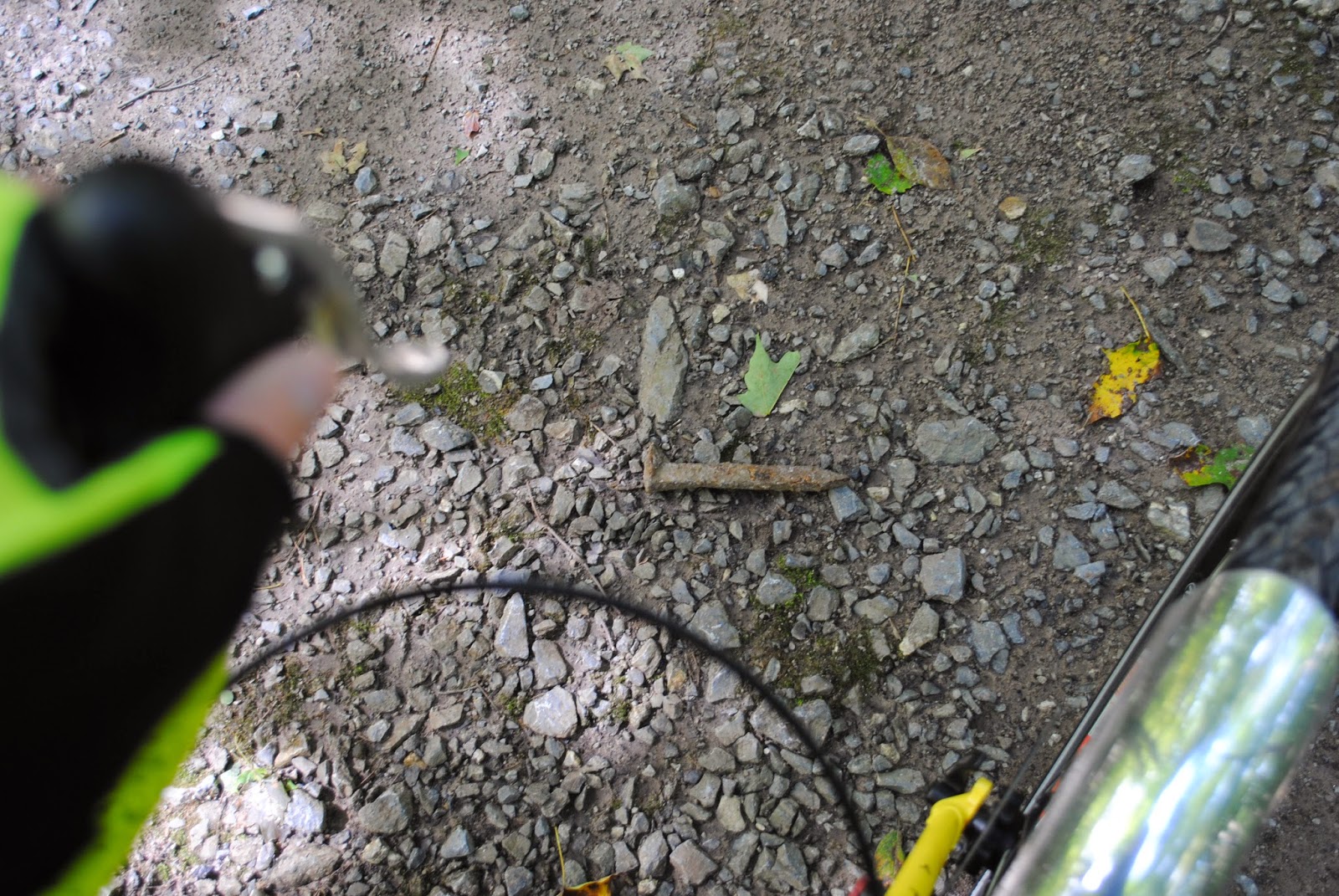 Or, landslides and falling trees? 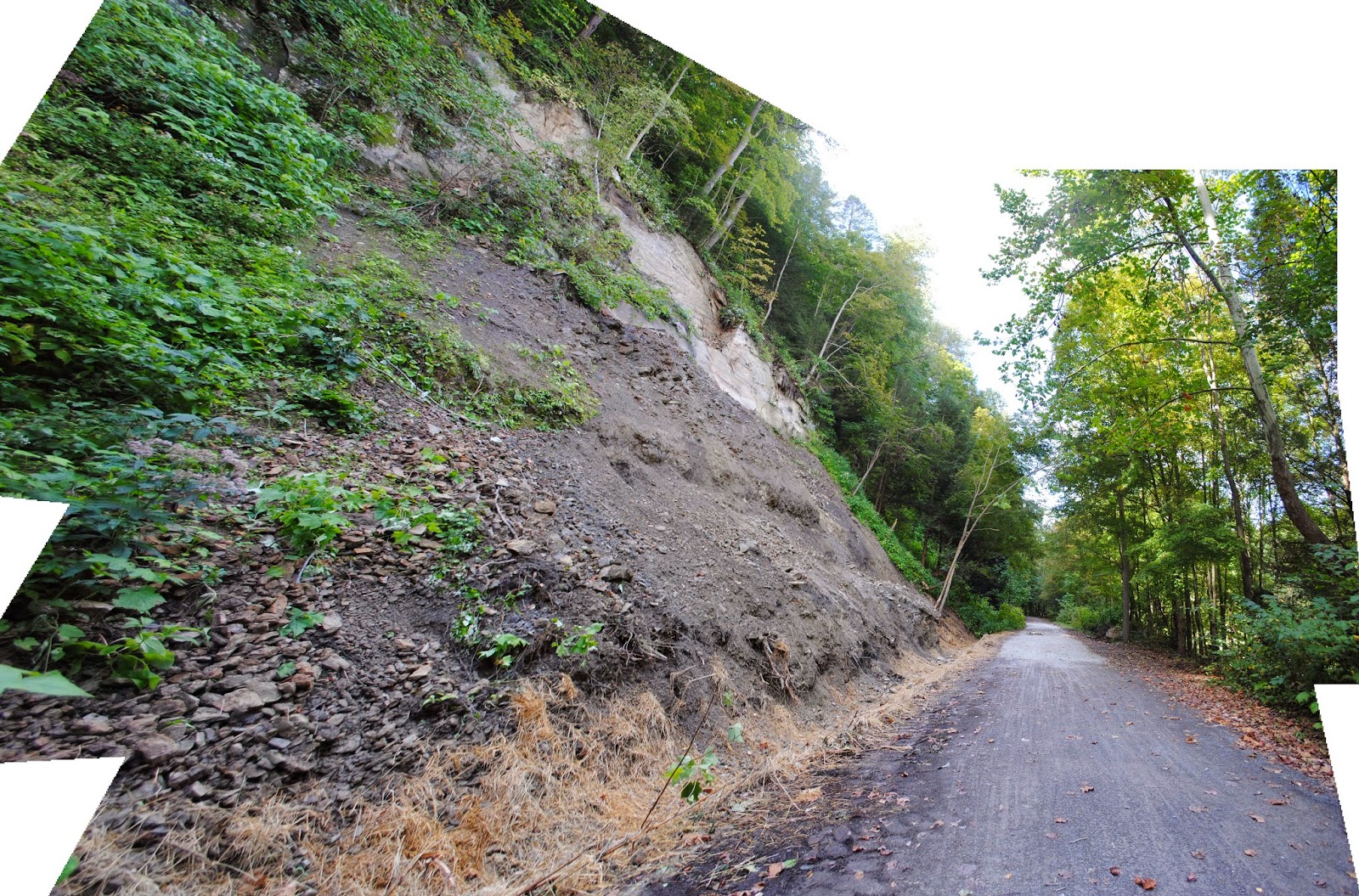 I came across this recently cleared landslide.
Here's what it looked like before it was cleared. 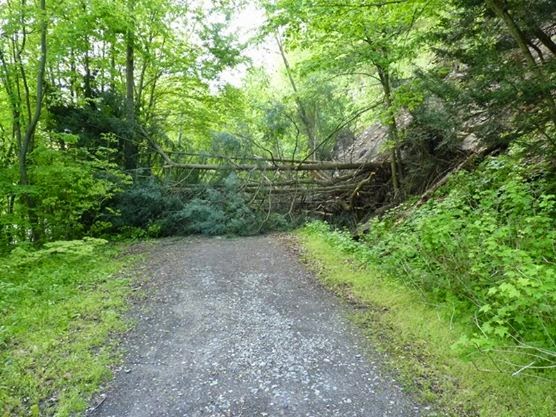 Trees go down along the GAP all the time and I'm sure one day I'll have to haul my bike through some branches just as other cyclists report. Adventure!

When I returned to Ohiopyle, I noted the interesting bike racks. These are clearly much easier to use with a cable lock rather than a u-lock. Another cyclist and I were commenting about them. A man walked up to me afterwards and asked how I liked the racks... because he designed them. He called them 'The Bike Garden'. Apropos. 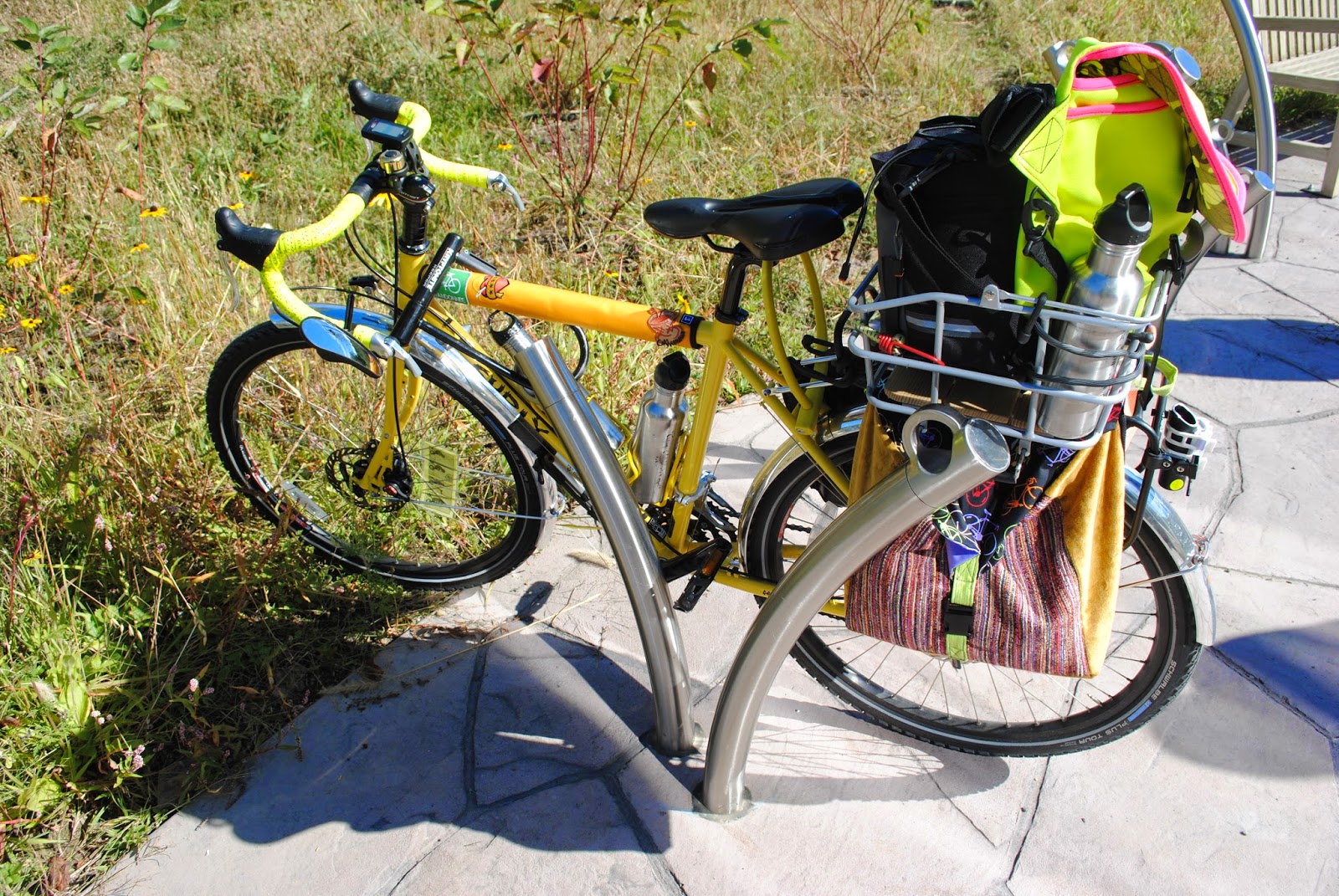 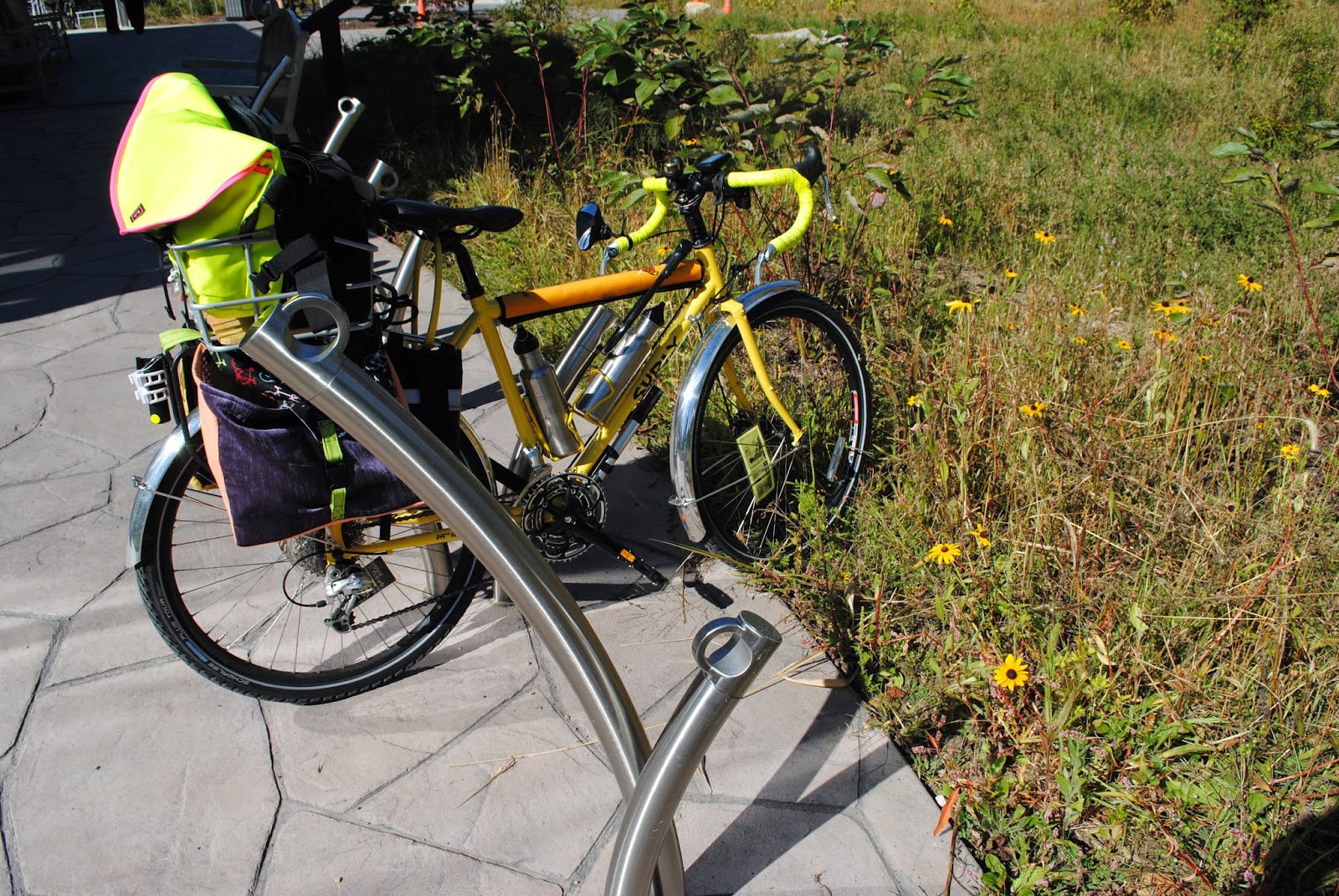