Today was hot, sunny and gorgeous. I'd read about a event on the South Side called the Birmingham BikeTacular and I was curious. Marko and I met and rode down to it after riding up through the Cemetery in Lawrencville. A hill in the heat and sun is brutal for me, but I'd prepared by hydrating myself a great deal the night and morning before the ride and making sure to take my magnesium.
SO MUCH SWEAT.

We'd arrived as one of the contests was taking place: wheelies. Seeing a pedicab do a side-wheelie is something to behold. 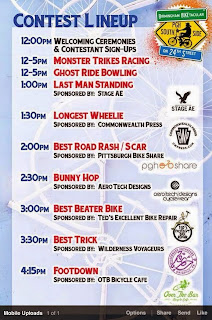 It looked fun but the observers and participants were sparse. We talked with Elizabeth and checked out the collection of weird bikes that Thick owns.  The next contest was 'Best scar' I found it rather odd that the BikeShare was sponsoring that one. Thankfully neither Marko or I have gnarly bike crash scars, so we were on our way.

Marko convinced me that it would be a good idea to ride up Mount Washington. What? My legs can only handle one big hill per day! They're not used to this sort of abuse! Despite the pleas of mercy from my legs, I said yes. My desire to go new places overrides any later repercussions such as leg cramps.
I'd not yet ridden up to Mount Washington... I'd taken the Duquesne incline, but never made the climb. He took us via The McArdle and we got a chance to see the Monongahela incline in action up close. Very cool. 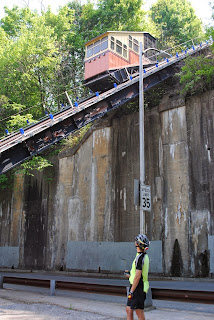 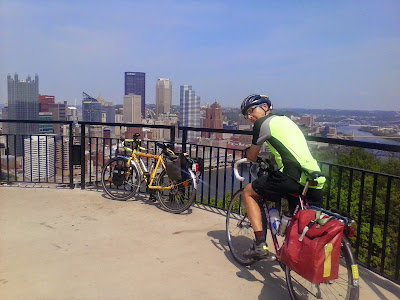 There was a library at the top of the hill and when I walked in to ask if I could use the water fountain and facilities the librarians looked at me with alarm and pointed the way to the bathroom. When I got to the mirror in the bathroom, I knew why they were alarmed, I forget how red my face gets in the heat and sun. I looked like I was about to keel over.

We rested and enjoyed the view and then descended via Sycamore, the car that trailed behind us was polite and patient enough, recognizing we had a myriad of potholes to dodge while we snaked down to Station Square. You simply cannot pass anyone on Sycamore with all the blind turns.

We ended up back in Lawrencville and I found the Clohn Art epicenter. I'd been seeing Clohn Art all over the city in the past year such as these: 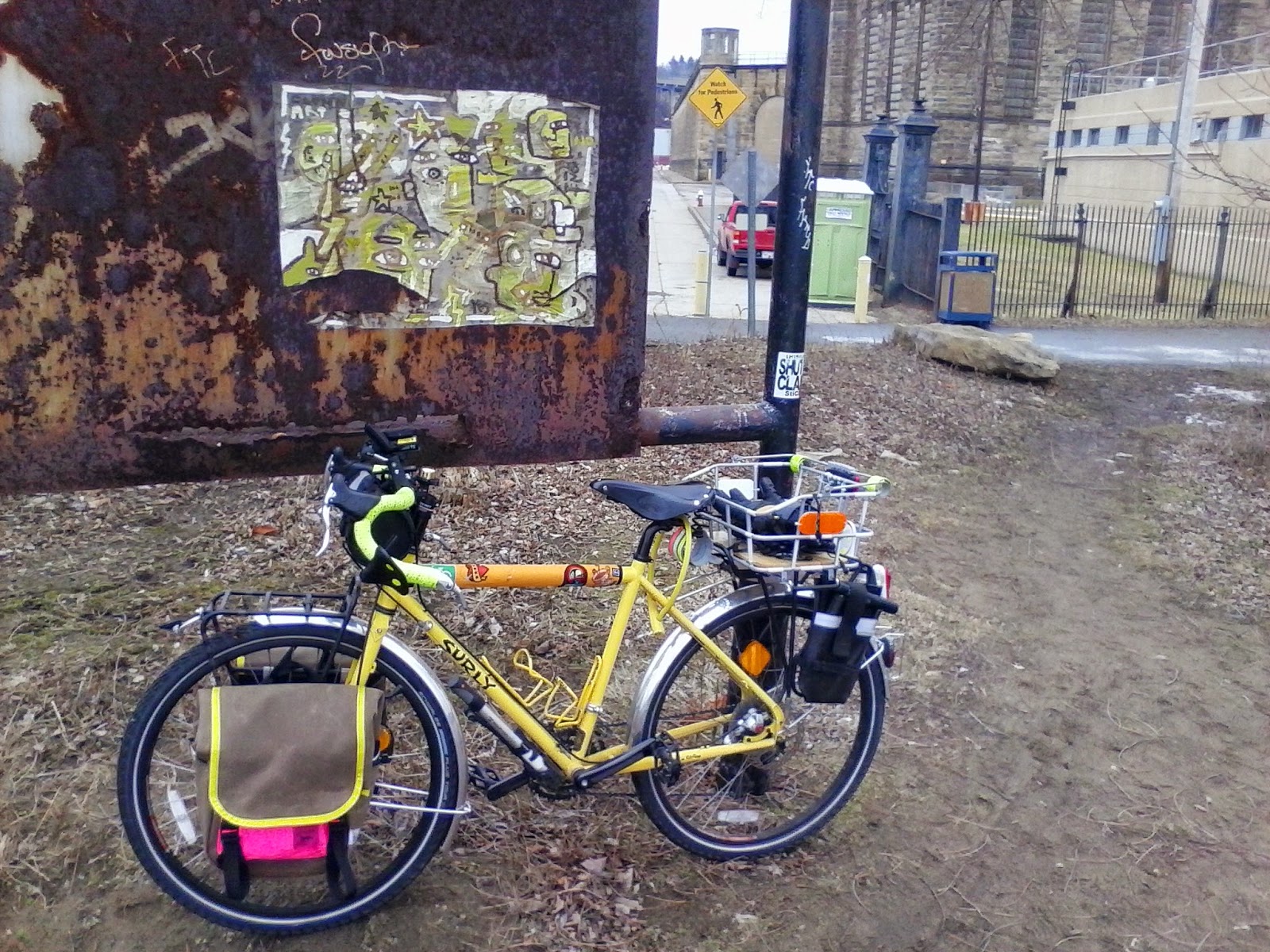 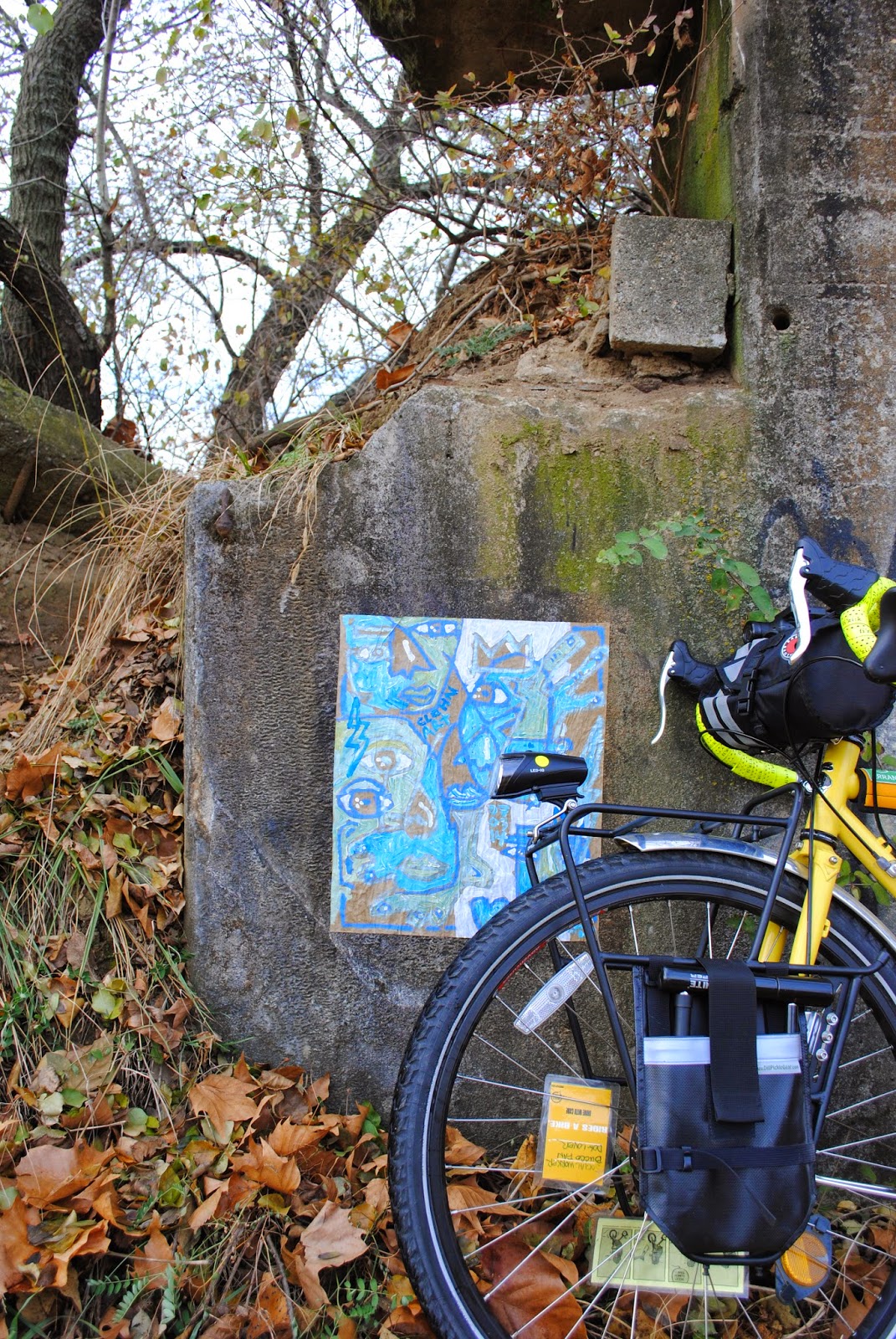 But this was the home office for Clohn Art. 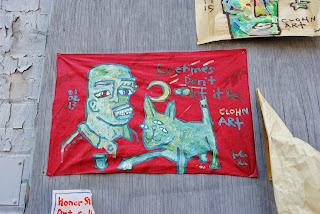 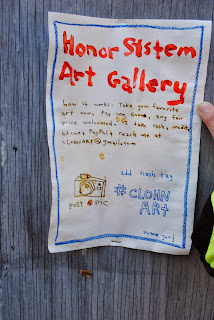 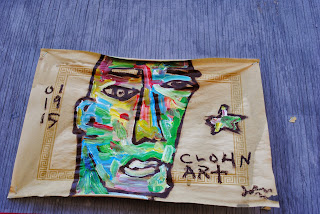 Marko dropped me off at the Pirates game where I was planning to meet DC Cycling Bloggers Rootchopper of A Few Spokes Shy of a Wheel, BicycleBug and DCCyclist. They were in town to catch a game at PNC park before GAPping back to DC. It was very good to meet them and I'd never seen the city from the highest seats in PNC Park, so I grabbed a shot. I love that view.
You can Twitter-follow the trio vicariously on their GAP trip with the hashtag #nowrongplan 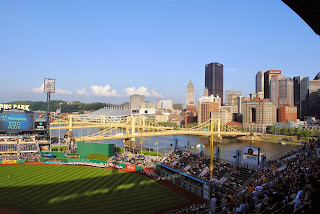 We got to see the rare triple play something I've never seen in person...and the type of triple play that had not yet existed in the history of major league baseball.
"Yadier Molina hit the first pitch he saw Saturday night right on the screws, then watched in disbelief, his hands glued to the sides of his pine-tarred helmet, as the play before him unfolded into the first recorded 4-5-4 triple play in major league history."

My legs decided to cramp up during the 6th inning: my left hamstring (joy, a NEW muscle to cramp up!) and my right gracillis and quad: all three at the same time.
I hobbled down the steps and tried walking them off and stretching them behind the dugout seats where I wouldn't obstruct anyone's view.  The painful grimace on my face cause three park employees to stop me and ask what was wrong and if they could help.... yeesh. They subsided before after a short walk.